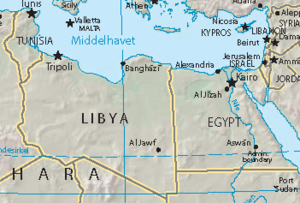 On July 21, 1977, there were the first gun battles between troops on the border, followed by land and air strikes. On July 24, the combatants agreed to a ceasefire under the mediation of the President of Algeria Houari Boumediène and the Palestine Liberation Organization leader Yasser Arafat.

Background
Relations between the Libyan and the Egyptian government had been deteriorating ever since the end of Yom Kippur War from October 1973, due to Libyan opposition to President Anwar Sadat’s peace policy as well as the breakdown of unification talks between the two governments. Frequent, politically-driven deportations of Egyptian migrants working in Libya also contributed to tense bilateral relations.[5] There is some proof that the Egyptian government was considering a war against Libya as early as 1974. On February 28, 1974, during Henry Kissinger’s visit to Egypt, President Sadat told him about such intentions and requested that pressure be put on the Israeli government not to launch an attack on Egypt in the event of its forces being occupied in war with Libya. In addition, the Egyptian government had broken its military ties with Moscow, while the Libyan government kept that cooperation going. The Egyptian government also gave assistance to former RCC members Major Abd al Munim al Huni and Omar Muhayshi, who unsuccessfully tried to overthrow Muammar Gaddafi in 1975, and allowed them to reside in Egypt.

The Libyan government claimed to have uncovered an Egyptian espionage network in Libya. US diplomatic circles viewed this tension as a sign of Libyan intentions to go to war against Egypt, and one diplomat observed:

LARG Libyan Arab Republic Government anticipates military attack from Egypt, which it hopes to exploit and cause overthrow of Sadat.

Throughout 1976 the Egyptian government was concentrating troops along the Libyan border. It enjoyed the support of the US government, who viewed Libya negatively, and was promised by Washington that no move in US-Libyan relations was to be made without consultation with Cairo. Policy experts in the US and Britain assessed that Sadat was planning an attack on Libya in order to overthrow Gaddafi. Relations kept deteriorating, and in early May 1977 Sadat turned down an American request to engage in reconciliation talks with the Libyan government.

Tensions between the two countries had increased during April and May 1977, as demonstrators attacked each other’s embassies. In June 1977, Libyan leader Gaddafi ordered the 225,000 Egyptians working and living in Libya to leave the country by July 1 or face arrest.