The end of a four day Libyan Egyptian War. 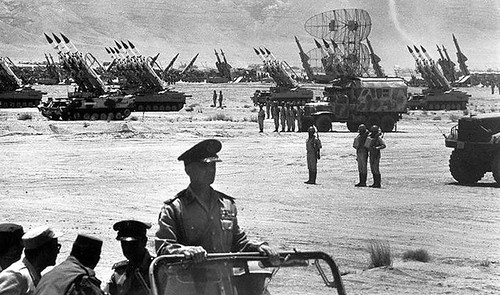 The Libyan–Egyptian War was a short border war between Libya and Egypt in July 1977. On July 21, 1977, there were first gun battles between troops on the border, followed by land and air strikes. On July 24, the combatants agreed to a ceasefire under the mediation of the President of Algeria Houari Boumediène and the Palestine Liberation Organization leader Yasser Arafat.

In June 1977, thousands of Libyan protesters began a “March on Cairo” as they headed towards the Egyptian border. The Libyans wanted to demonstrate against the increasing likelihood that Egypt would enter into a peace treaty with Israel. On July 20, after the protest march was stopped by Egyptian border guards, Libyan artillery units fired at Egypt in Sallum.

On July 21, 1977 Libyan forces carried out a raid on Sallum. The raid was carried out by the 9th Tank Battalion and supported by a few Mirage 5 aircraft.

Other Arab states then asked Sadat not to launch a full-scale invasion of Libya. Sadat heeded their call and forced Libya into a ceasefire. The Egyptian Army then withdrew from occupied territory.