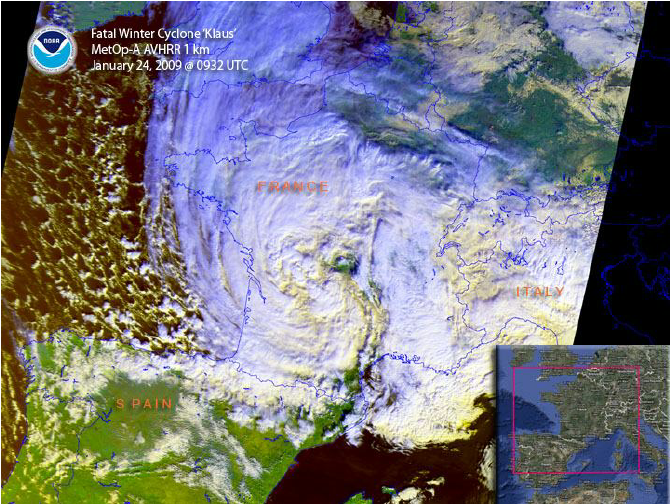 Klaus was a European windstorm or cyclone which made landfall over large parts of central and southern France, Spain and parts of Italy in January 2009. The storm was the most damaging since Lothar and Martin in December 1999.The storm caused widespread damage across France and Spain, especially in northern Spain.

The storm caused twenty-six fatalities, as well as extensive disruptions to public transport and power supplies, with approximately 1.7 million homes in southwest France and tens of thousands of homes in Spain experiencing power cuts. Severe damage to property and major forest damage was caused.Peak gusts were over 200 km/h; sustained winds of over 170 km/h were observed, which are hurricane-force winds.Thousands were evacuated from nearby housing estates in La Nucía, north of Benidorm in Alicante, as the Spanish Army helped to fight a forest fire, which was started by a felled electricity pylon. There were also forest fires in the region of Catalonia, while Spain put emergency services on high alert. Waves over 20 metres high were registered off the northern coast of Spain and dolphins were stranded on beaches in the region as a result of high winds. The storm left millions without electricity and fixed and mobile telephony.