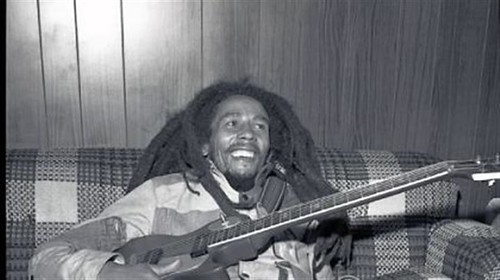 On September 23, 1980 Bob Marley held a show in Pittsburgh at what was then known as The Stanley Theatre as part of the Uprising Tour in support of the album of the same name. The concert with his band The Wailers held at the venue currently called The Benedum Center for the Performing Arts 36 years ago today turned out to be last scheduled public concert performed by the reggae legend.

In town for shows at Madison Square Garden, Marley was jogging in New York City’s Central Park on September 21, 1980 when he collapsed, likely due to complications from the malignant melanoma cancer he was diagnosed with in 1977. Despite his apparent ill health just two days prior, Marley still performed in Pittsburgh on September 23rd with his band featuring bassist Aston Barrett, drummer Carlton Barrett, percussionist Alvin Patterson, keyboardists Earl Lindo and Tyrone Downie, guitarists Al Anderson and Junior Marvin and vocalists the I Threes – Judy Mowatt, Marcia Griffiths and Rita Marley.

Songs from Uprising including “Coming in from the Cold,” “Work,” “Could You Be Loved,” “Redemption Song” and “Zion Train” featured prominently that night, alongside such Marley classics as “Positive Vibration,” “No Woman, No Cry,” “Jamming,” “Exodus” and “Is This Love.” A recording of The Stanley Theatre concert was officially released as Live Forever: The Stanley Theatre, Pittsburgh, PA, September 23, 1980.