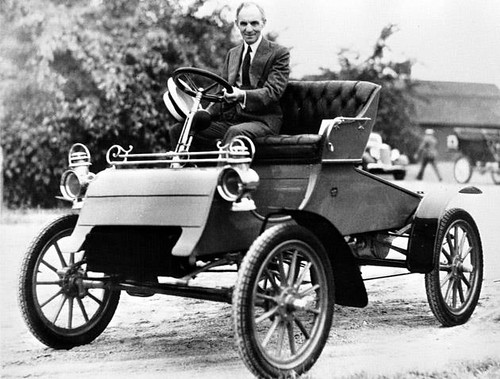 As any entrepreneur will tell you, paying your suppliers can be among the toughest challenges facing a start-up business. That’s as true now as it was in 1903, when 39-year-old motor racing enthusiast Henry Ford decided to strike out on his own.

In June that year, the Ford Motor Company was established. A thousand shares were split between 12 investors, with Ford, as vice-president and chief engineer, holding a 25.5% stake. But right from the get-go, the company was in dire straits.

The fledgling company depended on suppliers, including the Dodge brothers, to make car parts. These were assembled by a team of 40 engineers in a rented garage on Mack Avenue in Detroit. But Ford, who had yet to sell a single car, struggled to keep up with the payments.

Faced with the choice of walking away or doubling down, the Dodge brothers (who later founded their own famous car company) decided to throw their lot in with Ford. They agreed to write off $7,000, and extended a $3,000 six-month credit line in return for 10% of the company.

Not long after, things started to look up. The Ford Motor Company received its first order for three Model A cars, one of which was paid for upfront, while deposits totalling $1,320 were paid for the other two. That was just as well, seeing as the company had already blown through all but $223 of its $28,000 start-up capital.

“Who can’t afford a Fordmobile?”, asked an advert placed in the June edition of the Cycle and Automobile Trade Journal. Well, most people. The Model A came in two flavours: a four-seater ‘Tonneau’, priced at $850, while a sporty two-seater version, the ‘Runabout’, cost $750 – not cheap considering the average US salary in 1900 was only $438.

But Ernest Pfennig of Chicago was one of those who could, and on 23 July, he became the proud owner of a Ford. While the Model A was no runaway success, by October, the Ford Motor Company had managed to turn a $37,000 profit.

Ford and his engineers continued to tinker with his designs, and in 1908, the Model T went on sale. The ‘Tin Lizzie’ was a better hit with the motoring public, and safeguarded the Ford Motoring Company’s future in the years ahead.