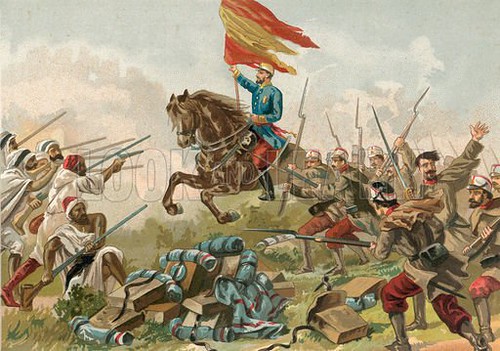 The Hispano-Moroccan War, also known as the Spanish–Moroccan War, the First Moroccan War, the Tetuán War, or, in Spain, as the African War, was fought from Spain’s declaration of war on Morocco on 22 October 1859 until the Treaty of Wad-Ras on 26 April 1860. It began with a conflict over the borders of the Spanish city of Ceuta and was fought in northern Morocco. Morocco sued for peace after the Spanish victory at the Battle of Tetuán.

Throughout the 19th century, Morocco suffered military defeats at the hands of the Europeans, notably in the Franco-Moroccan War in 1844. In 1856 the British were able to pressure Morocco into signing the Anglo-Moroccan treaties of Friendship which instated limitations on Moroccan Customs duties and brought an end to Royal monopolies.

The Spaniards saw the Moroccan defeat in 1844 and the 1856 treaties with the British as a sign of weakness. Spurred by a national passion for African conquest, the Spaniards declared war on Morocco.

In the late 1859, Moroccan tribesmen raided a Spanish garrison on the outskirts of Ceuta, provoking a response from the Spaniards who, ignoring Britain’s pleas for a peaceful settlement, invaded Morocco; they quickly defeated the Sultan’s Army near in Ceuta.

The Spaniards reached Tetuán on February 3rd, 1860. They bombarded the city for the following 2 days which allowed chaos to reign free, Riffian tribesmen poured into the city and pillaged it. The Moroccan historian Ahmad ibn Khalid al-Nasiri described the looting during the bombardment.

On February 5th the Spanish entered the city, ending both the battle and the war.