Florence Nightingale is sent to the Crimean War. 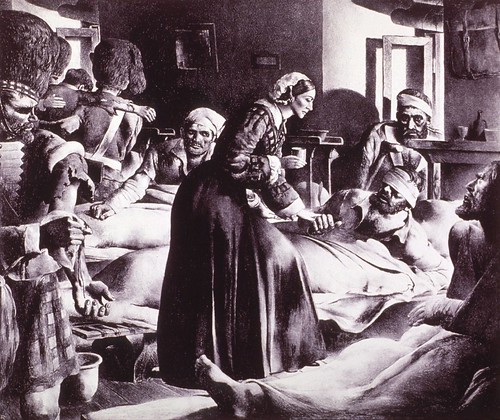 From a very young age, Florence Nightingale was active in philanthropy, ministering to the ill and poor people in the village neighboring her family’s estate. Determined to pursue her true calling despite her parents’ objections, in 1844, Nightingale enrolled as a nursing student at the Lutheran Hospital of Pastor Fliedner in Kaiserswerth, Germany.

In the early 1850s, Nightingale returned to London, where she took a nursing job in a Middlesex hospital for ailing governesses. Her performance there so impressed her employer that Nightingale was promoted to superintendant within just a year of being hired. The position proved challenging as Nightingale grappled with a cholera outbreak and unsanitary conditions conducive to the rapid spread of the disease. Nightingale made it her mission to improve hygiene practices, significantly lowering the death rate at the hospital in the process.

In October of 1853, the Crimean War broke out. Thousands of British soldiers were sent to the Black Sea, where supplies quickly dwindled. By 1854, no fewer than 18,000 soldiers had been admitted into military hospitals. In late 1854, Nightingale received a letter from Secretary of War Sidney Herbert, asking her to organize a corps of nurses to tend to the sick soldiers in the Crimea. Nightingale rose to her calling. She quickly assembled a team of 34 nurses from a variety of religious orders, and sailed with them to the Crimea just a few days later.