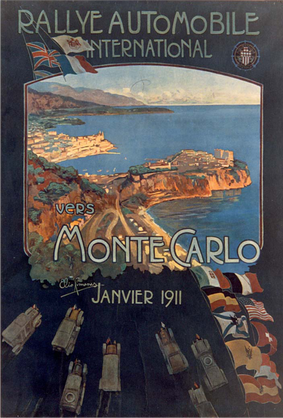 It was in 1909 that the idea of a car rally first took shape in Monaco. Alexandre Noghès, President of the “Association Sport Automobile Vélocipédique Monégasque”, predecessor of today’s “Automobile Club de Monaco”, suggested a race which would connect a large number of European cities from which the competitors would set off to converge on the finishing line in Monaco.

In January 21, 1911, everything was ready and the first rally took place. For almost a week, departures were staggered on dates and at times which corresponded to the distance separating them from Monaco. From Paris, Brussels, Geneva, Vienna and Berlin, cars set off on the roads, expected to clock up an average speed of 10 km/h including stops, with arrivals scheduled for Saturday, 28 January, in Monaco. Read more at Monte Carlo Legend.

The Monte Carlo Rally has become an annual rallying event organized by the Automobile Club de Monaco, which also organizes the Formula One Monaco Grand Prix and the Monaco Kart Cup. It has been held since 1911, when the inaugural rally was opened by Prince Albert I – making it the longest-running event in all rally sport. More information is available here.

Facts and figures about the Automobile Club de Monaco and the races can be found at its official webpage.