During the UEFA Cup match between FC Spartak Moscow and HFC Haarlem, 66 people are crushed to death in the Luzhniki disaster. 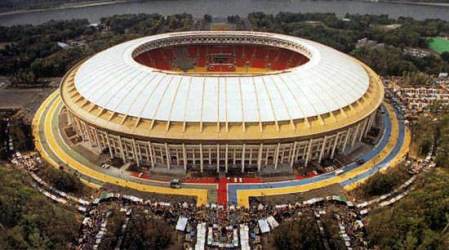 On 20 October 1982, the weather in Moscow was snowy and extraordinarily cold for the middle of October, ?10 °C.There were 82,000 match tickets available, but because of the freezing weather conditions only 16,500 tickets were sold. According to some reports the total number of tickets sold was 16,643.

The Grand Arena of Central Lenin Stadium (also called Olympic Stadium) did not have a roof over the seating at the time it was installed in the 1997 improvements. In preparation for the match, the stadium management decided to open only two of the four stands for fans: the East Stand and the West Stand, to have enough time to clean snow from the stands before the game Each stand had seating for 23,000 spectators. Most of the fans about 12,000 went to the East Stand, which was closer to the Metro station. There were approximately 100 Dutch supporters; the vast majority of fans in attendance were fans of Spartak Moscow.

The match started at 7:00 pm. In the 16th minute Spartak took the lead through an Edgar Gess strike. The rest of the game was largely uneventful. Minutes before the end of the game, several hundred fans began to leave the stadium in an attempt to get to the Metro station ahead of the crowds.

There were two covered stairways in Luzhniki under each stand, leading down to the exits. All of the exits at both stands were open. However, most of the fans from the East Stand rushed to Stairway 1, closer to the Metro station.