All 229 people on board are killed when Swissair Flight 111 crashes in Nova Scotia. 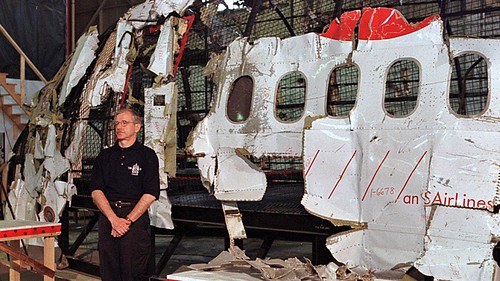 Scores of bodies and bits of debris were recovered from choppy seas off Nova Scotia as officials sought to determine why a Swissair jetliner bound from New York to Geneva fell into the Atlantic minutes short of an emergency landing in Halifax, apparently killing all 229 people on board.

As Canadian naval vessels and a flotilla of fishermen searched the crash site five miles off a picturesque village called Peggy’s Cove on Nova Scotia’s southeastern shore, it seemed unlikely that any survivors would be found, though all hope was not abandoned. Many of the victims’ grieving families gathered in New York and Geneva, and some were flown to Nova Scotia.

Investigators said that, although the cause of the crash was still a mystery and might not be learned for weeks or months, there were no indications that the wide-bodied jet, a McDonnell-Douglas MD-11, had been brought down by an act of criminality or terrorism.

Searchers, who retrieved about 60 bodies, as well as body parts and debris that included clothing, baggage and seat cushions, said that searchers in the afternoon had spotted what seemed to be a large piece of the aircraft intact perhaps the fuselage, containing many of the victims and the flight data recorders in about 120 feet of water.

Thus, unlike Trans World Airlines Flight 800, which blew up without warning in the sky off the South Shore of Long Island two years ago, with a loss of 230 lives, Swissair Flight 111 apparently did not explode, investigators said, but ran into trouble about 15 minutes before it crashed and did not break up until it hit the water.

The pilot, identified by Swissair officials as Urs Zimmermann, 50, aided by the co-pilot, Stefan Low, 36, turned again toward Halifax and flew on for 11 minutes, gradually descending to 9,600 feet, according to radar tracking data. During that time, the passengers and crew were told of the emergency and put on life jackets, which rescuers said they later found on some bodies.

Share on Facebook Share
Share on TwitterTweet
Share on LinkedIn Share
Famous Words of Inspiration...
"We should enact an 'e' tax. Government agents would roam the country looking for stores whose names contained any word that ended in an unnecessary 'e,' such as 'shoppe' or 'olde,' and the owners of these stores would be taxed at a flat rate of $50,000 per year per 'e.' We should also consider an additional $50,000 'ye' tax, so that the owner of a store called 'Ye Olde Shoppe' would have to fork over $150,000 a year. In extreme cases, such as 'Ye Olde Barne Shoppe,' the owner would simply be taken outside and shot."
Dave Barry
— Click here for more from Dave Barry