North Dakota and South Dakota are admitted as the 39th and 40th USA states. 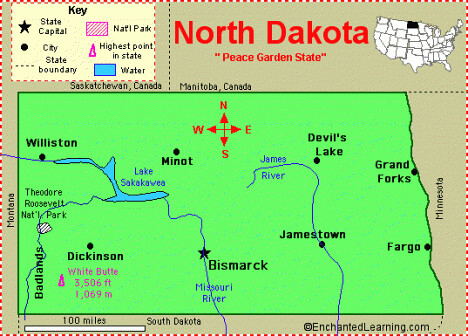 The U.S. Congress created the Dakota Territory, which consisted of the present-day states of North and South Dakota, and most of Montana and Wyoming. In 1863 the size of the territory was reduced to the area of North and South Dakota. With the advent of the Northern Pacific Railroad, immigration and settlement increased; the climate was suitable for wheat, which was in high demand in American cities and in Europe. By the late 1870s Dakotans felt inadequately represented by territorial status and began pushing for statehood, either as one state or two.

Today, North Dakota is in the midst of an oil boom. The state sits on a rock unit known as the Bakken formation, which also covers parts of Montana and Saskatchewan. The new technology of “fracking” has enabled oil production to explode in the area, going from 3,000 barrels a day in 2005 to some 800,000 in 2013 (about 11% of the country’s total production).