A group of anarchists set off bombs in eight different USA cities. 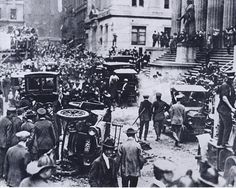 In seven U.S. cities, on evening of June 2, 1919, all within approximately 90 minutes of one another, bombs of extraordinary capacity rocked some of the biggest urban areas in America, including New York; Boston; Pittsburgh; Cleveland; Washington; D.C.; Philadelphia; and Patterson, New Jersey. The bombings were a concerted effort among U.S. based anarchists who were most likely disciples of Luigi Galleani, a vehemently radical anarchist who advocated violence as a means to effect change, to rid the world of laws and capitalism.

Anarchism is a belief that society should have no government, laws, police, or any other authority. The majority of anarchists in the U.S. advocate change through non-violent, non-criminal means. However, a small minority, believes change can only be accomplished through violence and criminal acts.

On June 2, 1919, a militant anarchist named Carlo Valdinoci, a former editor of the Galleanist publication Cronaca Sovversiva and close associate of Luigi Galleani blew up the front of newly appointed Attorney General A. Mitchell Palmer’s home in Washington, D.C. He also blew himself up in the process when the bomb exploded too early. A young Franklin and Eleanor Roosevelt, who lived across the street, were also shaken by the blast.

The bombs of June 2nd were much larger than those previously sent by mail in April. These bombs were comprised of up to 25 pounds of dynamite packaged with heavy metal slugs designed to act as shrapnel. Addressees included government officials who had endorsed anti-sedition laws and deportation of immigrants suspected of crimes or associated with illegal movements, as well as judges who had sentenced anarchists to prison.