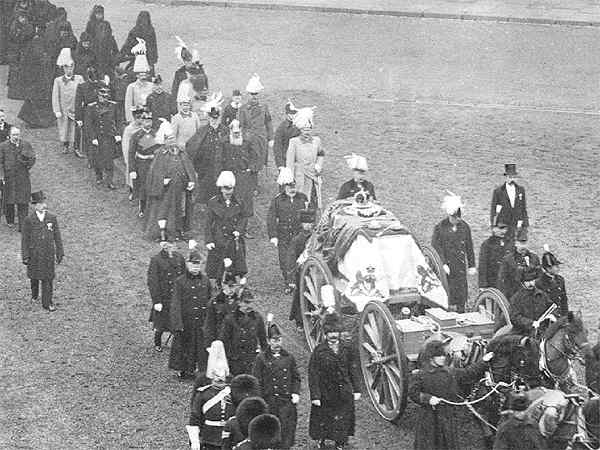 The funeral of Queen Victoria.

Queen Victoria died on 22nd January 1901 at Osborne House on the Isle of Wight and was buried in The Mausoleum, Frogmore, Windsor, on 4th February 1901 following a State Funeral in St. George’s Chapel on 2nd February 1901.
After the funeral her coffin lay-in-state in The Albert Memorial Chapel for two days and was then taken to The Mausoleum by The Royal Horse Artillery. Her son, Edward, had been proclaimed King Edward VII.The Funeral Cortège pauses for a moment just past The Guildhall on its way to Park Street, the Long Walk, and up through the castle grounds to St George’s Chapel. 2nd February 1901. As described in the letter below, the Royal Horse Artillery had been unable to draw the gun carriage and so sailors from the Royal Navy has taken over the task within moments.After the funeral service, officers of The Grenadier Guards guarded the body of the late Queen Victoria during the Lying in State in The Albert Memorial Chapel, 2nd – 4th February, 1901.Two days after the funeral, on 4th February 1901, Queen Victoria was taken to Frogmore Mausoleum to rest beside her husband Prince Albert. In this picture the cortège is on its way from The Albert Memorial Chapel through the Upper Ward of Windsor Castle, drawn by the Royal Horse Artillery.