Thomas Grey is beheaded for conspiring against King Henry V. 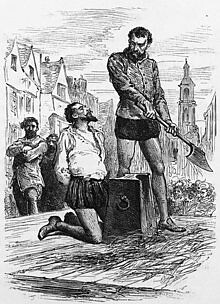 On this date in 1415, about to set sail from Southampton for the invasion of France that would define his reign, King Henry V favored the Bargate with the beheading of Sir Thomas Grey.

Henry V at this moment was just two years on the throne, the son of a usurper who had deposed and murdered Richard II. That he was now off to venture his life in the field, leaving no wife or child, could have placed his line with but a small mischance in the way of extinction.

The Southampton Plotters had a mind to be that small mischance.

Their idea was to topple King Henry in favor of Edmund Mortimer, the Earl of March — who had been Richard II’s heir presumptive at the time Richard was deposed, and whose claim to the throne should have preceded that of Henry’s own family were such matters decided by lawyers alone.

Henry’s coup d’etat and the aspirations thereafter descending respectively from Henry IV and from Richard II were the dynastic font of the Wars of the Roses. Those wars occurred well after the events of today’s post but the opposing factions were already now beginning to wend their ways towards Bosworth Field.

Mortimer was a seven-year-old when Richard was dethroned. He grew up in confinement, albeit honorably treated. Despite his family’s understandably rocky relationship with the new regime, Mortimer himself didn’t cross Henry V, and Henry guardedly admitted him first to his liberty and then to the privileges his rank entailed.

Although Mortimer was rapped over the knuckles for a disapproved marriage, he had never yet ventured any apparent act of treason. By appearances, the Southamptom Plot might have been the moment he went all the way to the brink and then chickened out, for it was Mortimer himself who (without admitting any involvement) personally finked out the plan to King Henry on August 1, 1415. All three of its principal authors spent that very night in the dungeons: Henry, Baron Scrope, a longtime friend and confidante of the king; Richard, Earl of Cambridge, a somewhat impoverished peer of the realm; and our man, the knight Sir Thomas Grey.

Henry gratefully agreed to the pretense that this plot had been a terrible surprise to Mortimer and pre-emptively pardoned him of any taint arising from it.