The Algerian War of Independence ends. 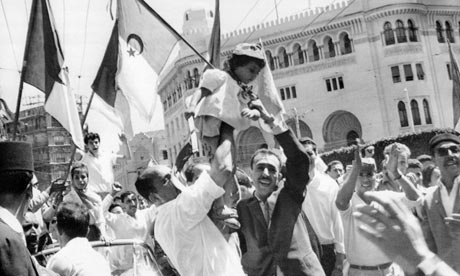 The Secret Army Organization was founded in 1961 as a response to General De Gaulle’s speech on Algeria’s right to self determination. It was formed by a group of pied noirs that called themselves “counter-terrorists” and had carried out attacks against the F.L.N since early in the war. By acts of sabotage and assassination in France and French Algerian territories, the O.A.S attempted to prevent Algerian Independence. On September 1961 the O.A.S attempted to assassinate De Gaulle but failed.

Despite the O.A.S attempts to stall and prevent Independence, Evian peace talks were held on March 7th between the F.L.N’s provisional government and De Gualle. The Evian Agreement was signed on March 18, 1962, and a cease fire was called on the 19th . It was also agreed Algeria would be able to vote for its future Independence on 1st of July.

Now desperate on saving “French Algeria”, the O.A.S reacted more violently than ever. The three months between the cease fire and the day of Independence the O.A.S unleashed a series of attacks. Their hope was that these attacks would to force the F.L.N to abandon cease fire therefore revoking any agreement between the F.L.N and the French government. In April they raided Muslim hospitals in Algiers, killing ten patients in their beds and wounding seven others. On the 3rd of May they filled a truck with explosives and killed 62 Muslims and wounded 110. On May 10th thirty Muslim women were killed in the streets of Oran and Algiers. Other actions included blowing up part of the library of the University of Algiers and the assassination of a famous Berber writer. Despite the O.A.S’s violent provocations, the F.L.N did not retaliate and kept the cease fire agreement. In June 1962 a cease fire was agreed between the O.A.S and the F.L.N.