The Japanese conquest of Burma during World War II begins. 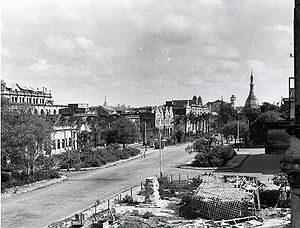 During the war in 1942, the BIA had grown in an uncontrolled manner, and in many districts officials and even criminals appointed themselves to the BIA. It was reorganised as the Burma Defence Army under the Japanese but still headed by Aung San. While the BIA had been an irregular force, the BDA was recruited by selection and trained as a conventional army by Japanese instructors.

Ba Maw was afterwards declared head of state, and his cabinet included both Aung San as War Minister and the Communist leader Thakin Than Tun as Minister of Land and Agriculture as well as the Socialist leaders Thakins Nu and Mya. When the Japanese declared Burma, in theory, independent in 1943, the Burma Defence Army was renamed the Burma National Army.

The flag of the State of Burma, used 1943-5.
It soon became apparent that Japanese promises of independence were merely a sham and that Ba Maw was deceived. As the war turned against the Japanese, they declared Burma a fully sovereign state on 1 August 1943, but this was just another façade. Disillusioned, Aung San began negotiations with Communist leaders Thakin Than Tun and Thakin Soe, and Socialist leaders Ba Swe and Kyaw Nyein which led to the formation of the Anti-Fascist Organisation in August 1944 at a secret meeting of the CPB, the PRP and the BNA in Pegu. The AFO was later renamed the Anti-Fascist People’s Freedom League, and roundly opposed the Japanese fascism, proposing a fairer and more equal society.

Thakins Than Tun and Soe, while in Insein prison in July 1941, had co-authored the Insein Manifesto which, against the prevailing opinion in the Dobama movement, identified world fascism as the main enemy in the coming war and called for temporary co-operation with the British in a broad allied coalition which should include the Soviet Union. Soe had already gone underground to organise resistance against the Japanese occupation, and Than Tun was able to pass on Japanese intelligence to Soe, while other Communist leaders Thakins Thein Pe and Tin Shwe made contact with the exiled colonial government in Simla, India.