The first All American Soap Box Derby is held in Dayton, Ohio. 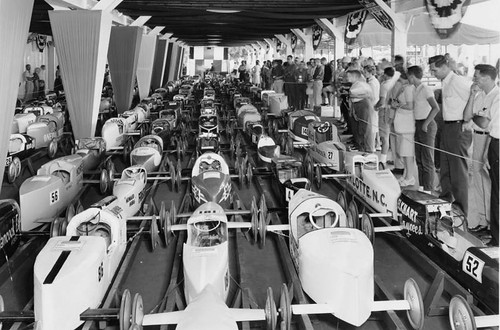 The first Soap Box Derby was organized by Myron E. “Scottie” Scott, a news photographer for the Dayton Daily News in 1933 and was held on Hilltop Avenue in Oakwood, Ohio (suburban Dayton). Nineteen boys and nineteen race cars showed up.

Sensing the enormous interest, Scott secured sponsors for a larger effort. When the event was expanded, it was moved to Burkhardt Avenue near Smithville Road in Dayton, Ohio. On Saturday, August 19, 1933, 362 kids, aged 6-16, showed up with homemade cars built of wooden crates, sheet tin, wagon and baby-buggy wheels to race in soap box vehicles they built themselves.

The 1934 event took on national stature when champions from 34 other cities came to Dayton to compete. Put up at the Van Cleve Hotel, they were the toast of the town for three days. There were parties, a banquet and theater outings. Wild Bill Cummings, the Indy 500 winner, took part in the celebration, as did Jimmy Mattern, the round-the-world flyer. Renowned NBC radio man, Graham McNamee, broadcast the race live and Mayor Charles J. Brennan made a flying trip down the Burkhardt Hill course.

After the Dayton Championship, there was an Ohio Championship, then the All American Soap Box Derby and, finally, a Blue Flame Championship for kids 16 to 18 with advanced cars. Prizes included everything from college scholarships to a three-day trip to the World’s Fair in Chicago, a small, powered Custer Car with a 1/2 horsepower engine, box cameras, radios and Babe Ruth bats and balls.

The Dayton winner was 13- year-old Jack Collopy, whose salvage yard creation included baby-buggy wheels, gags-pipe axles greased with lard and a clothesline steering system. The national winner was Robert Turner of Muncie, Ind., who made his car from the wood of a saloon bar.

A year later, the race moved to Akron, Scott got a public relations job with Chevrolet and later named the Corvette.