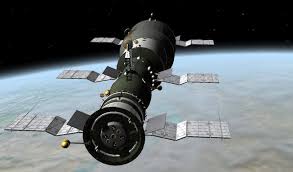 Salyut 1 was the first space station of any kind, launched into low Earth orbit by the Soviet Union on April 19, 1971. The Salyut program followed this with five more successful launches out of seven more stations. The final module of the program, Zvezda became the core of the Russian segment of the International Space Station and remains in orbit.

Background
Salyut 1 originated as a modification of the military Almaz space station program then in development. After the landing of Apollo 11 on the Moon in July 1969, the Soviets began shifting the primary emphasis of their manned space program to orbiting space stations, with a possible lunar landing later in the 1970s if the N-1 booster became flight-worthy. One other motivation for the space station program was a desire to one-up the US Skylab program then in development. The basic structure of Salyut 1 was adapted from the Almaz with a few modifications and would form the basis of all Soviet space stations through Mir.

Civilian Soviet space stations were internally referred to as “DOS”, although publicly, the Salyut name was used for the first six DOS stations. Several military experiments were nonetheless carried on Salyut 1, including the OD-4 optical visual ranger, the Orion ultraviolet instrument for characterizing rocket exhaust plumes, and the highly classified Svinets radiometer.

Construction and operational history
Construction of Salyut 1 began in early 1970, and after nearly a year it was shipped to the Baikonur Cosmodrome. Some remaining assembly work had yet to be done and this was completed at the launch center. The Salyut programme was managed by Kerim Kerimov, chairman of the state commission for Soyuz missions.

Launch was planned for April 12, 1971 to coincide with the 10th anniversary of Yuri Gagarin’s flight on Vostok 1, but technical problems delayed it until the 19th. The first crew launched later in the Soyuz 10 mission, but they ran into troubles while docking and were unable to enter the station; the Soyuz 10 mission was aborted and the crew returned safely to Earth. A replacement crew launched in Soyuz 11 and remained on board for 23 days. This was the first time in the history of spaceflight that a space station had been manned, and a new record time was set in space. This success was, however, short-lived when the crew was killed during re-entry, as a pressure-equalization valve in the Soyuz 11 re-entry capsule had opened prematurely, causing the crew to asphyxiate. After this accident, all missions were suspended while the Soyuz spacecraft was redesigned. The station was intentionally destroyed by de-orbiting after six months in orbit, because it ran out of fuel before a redesigned Soyuz spacecraft could be launched to it.

Structure
At launch, the announced purpose of Salyut was to test the elements of the systems of a space station and to conduct scientific research and experiments. The craft was described as being 20 m in length, 4 m in maximum diameter, and 99 m3 in interior space with an on-orbit dry mass of 18,425 kg. Of its several compartments, three were pressurized, and two could be entered by the crew.

Transfer compartment
The transfer compartment was equipped with the only docking port of Salyut 1, which allowed one Soyuz 7K-OKS spacecraft to dock. It was the first use of the Soviet “probe and drogue” type docking system that allowed internal crew transfer, a system that is in use today. The docking cone had a 2 m front diameter and a 3 m aft diameter.

Auxiliary compartments
The third pressurized compartment contained the control and communications equipment, the power supply, the life support system, and other auxiliary equipment. The fourth, and final, unpressurized compartment was about 2 m in diameter and contained the engine installations and associated control equipment. Salyut had buffer chemical batteries, reserve supplies of oxygen and water, and regeneration systems. Externally mounted were two double sets of solar cell panels that extended like wings from the smaller compartments at each end, the heat regulation system’s radiators, and orientation and control devices.

Orion 1 Space Observatory
The astrophysical Orion 1 Space Observatory designed by Grigor Gurzadyan of Byurakan Observatory in Armenia, was installed in Salyut 1. Ultraviolet spectrograms of stars were obtained with the help of a mirror telescope of the Mersenne system and a spectrograph of the Wadsworth system using film sensitive to the far ultraviolet. The dispersion of the spectrograph was 32 Å/mm, while the resolution of the spectrograms derived was about 5 Å at 2600 Å. Slitless spectrograms were obtained of the stars Vega and Beta Centauri between 2000 and 3800 Å. The telescope was operated by crew member Viktor Patsayev, who became the first man to operate a telescope outside the Earth’s atmosphere.