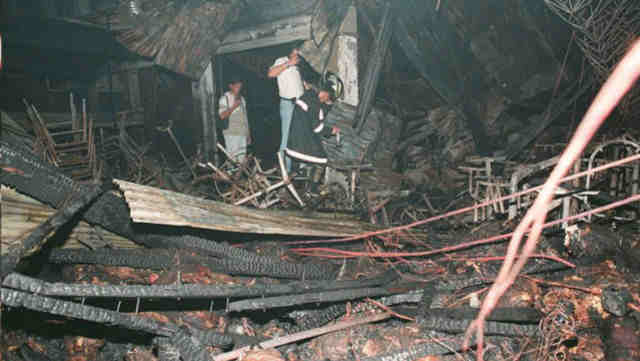 The Ozone Disco Club fire in Quezon City, Philippines broke out shortly before midnight at 11:35 pm Philippine Standard Time, March 18, 1996 leaving at least 162 people dead. It is officially acknowledged as the worst fire in Philippine history, and among the 10 worst nightclub fires in the world.

Ozone Disco, located near the 11th World Scout Jamboree Memorial Rotonda along Timog Avenue in Quezon City, was opened in 1991 by Segio Orgaoow. Its building had previously housed a jazz club named “Birdland”. The disco was operated by Westwood Entertainment Company, Inc.

Incident
The fire broke out just before midnight on March 18, 1996. At the time of the fire, it was estimated that there were around 350 patrons and 40 club employees inside Ozone Disco, though it had been approved for occupancy for only 35 persons. Most of the club guests were high school and college students attending graduation or end-of-the-school-year celebrations. Survivors reported seeing sparks flying inside the disc jockey’s booth shortly before midnight, followed by smoke which they thought was part of the party plan of the DJ. Another survivor added that after about 15 seconds of smoke, the electrical systems of the disco shut down, followed by the flames.

Many of the bodies were discovered along the corridor leading to the only exit, piled up waist-high. Quezon City officials were quoted as saying that the club’s emergency exit was blocked by a new building next door, and that there was no proper fire exit installed. It was also reported that the exit had been locked from the outside by the club’s security guards, who had thought that a riot had taken place.

A 2008 photograph of the Ozone Disco building in Timog Avenue, Quezon City. The structure remained standing until 2015; it was never restored for commercial use and remained undisturbed until its demolition in March 2015.
Casualties
The final death count was reported as between 160 and 162 people, the latter being the figure cited by the trial court that heard the ensuing criminal case. The death toll was one of the worst ever for a nightclub fire, though it was subsequently surpassed by the República Cromañón nightclub fire. In addition, at least 95 people were injured.

Investigation and aftermath
Six people involved with Westwood Entertainment were tried before the courts for criminal charges of “reckless imprudence resulting in multiple homicide and multiple serious injuries”. On March 16, 2001, the president of Westwood Entertainment, Hermilo Ocampo, and the corporation’s treasurer, Ramon Ng, were found guilty by a Quezon City trial court and sentenced to a four-year prison term, and fined 25 million pesos each. They and their co-accused were also ordered to indemnify the families of the deceased 150,000 pesos, and 100,000 pesos to the injured. The trial court concluded that Ocampo and Ng failed to provide fire exits and sprinklers inside the establishment, that the fire extinguishers they placed were defective, and that the lone exit was through a small door that swung inward and did not meet the standard set by the building code. A former employee who was among the survivors of the fire has claimed that the inward swinging doors were installed because it was good feng shui.

In November 2001, twelve officials of the Quezon City government were charged before the Sandiganbayan for reckless imprudence resulting in multiple homicides and multiple serious injuries. They were accused of allowing Ozone Disco to secure a certificate of annual inspection in 1995 “despite the inadequacy, insufficiency and impropriety of the documents submitted by the owners.” In 2007, one of the twelve — the former city engineer and building official of Quezon City, Alfredo Macapugay — was discharged from criminal and civil liability after the Sandiganbayan concluded that he had no hand in the issuance of the necessary permits to Ozone Disco management.

As of 2008, the structure which housed the Ozone Disco remained standing in Timog Avenue, Quezon City, though the site has not been commercially used since then. For a few years after the incident there was a makeshift memorial on the site featuring photographs of the victims. This has since been dismantled, and no marker or official memorial commemorates the incident or its victims.

On November 20, 2014, seven officials of the Quezon City government were found guilty under the Philippines’ anti-graft and corrupt practices law by the country’s anti-graft court Sandiganbayan. They were held liable for negligence in connection with the approval of the building permit and issuance of certificates of occupancy for the company which owned Ozone. The club’s owners were also found to be liable as well.

In March 2015, a week before the 19th anniversary of the tragedy, the Ozone Disco building was demolished, residents near the area said. Relatives of the victims still visit the site. As of October 2016, the former location of the Ozone Disco Club is now currently occupied by a branch of known food chain GoodAh!!!, co-owned by television host Boy Abunda.

In media
The October 2, 2008 episode of the GMA Network public affairs show Case Unclosed featured the Ozone Disco fire and its aftermath. The episode was directed by Adolfo Alix, Jr. 2 days before the showing of this episode, September 30, 2008, Quezon City Mayor Feliciano Belmonte, Jr. released an ordinance that warns the owners of entertainment establishments to use swing-in/swing-out doors.