The Battle of Sprimont takes place. 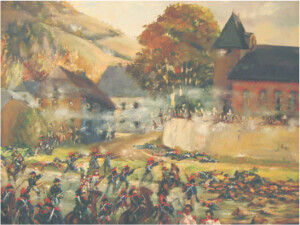 The Battle of Sprimont, Battle of Esneux or Battle of the Ourthe was a battle between French Republican and Austrian troops on the plateau between the valleys of the Vesdre, the Ourthe and the Amblève, 20 kilometres (12 mi) south of Liège. It occurred on 17 and 18 September 1794 and was a French Republican victory. The battle put a final end to the Ancien Régime in what is now Belgium, then essentially the Austrian Netherlands, Principality of Liège and the Principality of Stavelot-Malmedy.

French troops dislodged Austrian troops occupying the plateau, though the French suffered heavy losses. Associated with the battle are the villages of Sprimont, Esneux, Fontin and the site of the La Redoute, whose name originates in a redoubt involved in the battle.