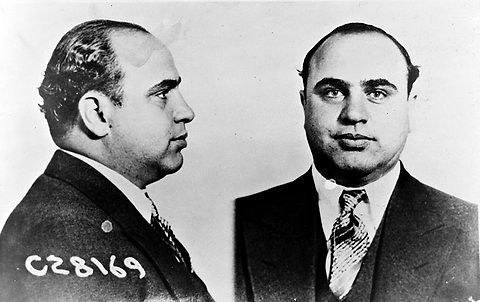 On Oct. 17, 1931, the Chicago mobster Al Capone was convicted on five of 23 income tax evasion counts he faced, and which later yielded an 11-year prison sentence. During the trial, Mr. Capone’s efforts to avoid a strict sentence were thwarted by Judge James H. Wilkerson, who refused to offer a lenient sentence in exchange for a guilty plea. Wilkerson also swapped out the jury after Mr. Capone tried to bribe the people who were serving on it.

The Oct. 18 New York Times reported that Capone was oddly calm as the verdict was read: “Capone grinned as though he felt he had gotten off easily. … Capone faces a maximum of seventeen years’ imprisonment and $50,000 fine. He did not seem to realize that. He kept grinning at all and sundry in the court room, his bulky figure in a screaming green suit (one of the $135 ones) drawing all eyes toward him.”

Capone was a legendary figure in the Chicago underworld. He became a mob boss in 1925 and generated millions of dollars from gambling and bootlegging rackets. He brutally eliminated his rivals—most famously in 1929, when his men killed seven members of George (Bugs) Moran’s gang in the St. Valentine’s Day Massacre. He held, according to the Times, “undisputed control of all the illegal sources of revenue in the city and its suburbs.”

Capone’s actions made him an obvious target for federal authorities. Having been convicted in 1929 of a weapons charge, he used his influence to secure a comfortable prison cell in which to serve his short sentence. He was not so lucky the second time around: he was closely guarded in several prisons, including Alcatraz. He was released in 1939, but by then his health had seriously declined as a result of having contracted syphilis. He was unable to return to mob life and died in 1947.

Share on Facebook Share
Share on TwitterTweet
Share on LinkedIn Share
Famous Words of Inspiration...
"I have learnt that success is to be measured not so much by the position that one has reached in life as by the obstacles which he has overcome while trying to succeed."
Booker T. Washington
— Click here for more from Booker T. Washington