Prince Charles calls a proposed addition to the National Gallery, London, a “monstrous carbuncle on the face of a much-loved and elegant friend”, sparking controversies on the proper role of the Royal Family and the course of modern architecture. 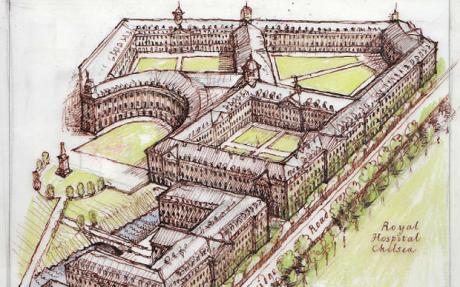 THE design by the architect Robert Venturi for an extension to the National Gallery in London, which may be the most significant architectural commission in Europe ever awarded to an American architect, was made public yesterday.

Construction of the Venturi design, which will cost roughly $48 million, will start ”early next year,” according to a spokesman for the gallery. It will be called the Sainsbury Wing in honor of the family whose grocery-store fortune will finance it.

The announcement of a final design for the National Gallery addition ends a chapter of one of Europe’s longest-running architectural sagas. The gallery has been trying to expand its building at Trafalgar Square for more than a decade, and in 1981 it announced a design for a starkly modern gallery-office building combination by the British firm of Ahrends Burton & Koralek that was denounced by Prince Charles as ”a monstrous carbuncle on the face of a much-loved friend.”

The embarrassment over Prince Charles’s remark, coupled with the growing trend toward re-use of classical forms in architecture, led to the abandonment of the first design and to an international search for an architect who would create a building more sympathetic to William Wilkins’s neo-classical gallery of 1838. In early 1986 Mr. Venturi, of the Philadelphia firm of Venturi, Rauch & Scott Brown, was chosen over five other architects, each of whom had been invited to submit preliminary proposals.

The five losing designs for this critical public building in London were made public last year; the winning design was held in rigid secrecy until this week. It turns out to be a highly complex form, like so much of the work of Mr. Venturi, the architect who is often considered the spiritual father of the current post-modern movement but who in fact disdains any simple or direct return to historical style.

Continue reading the main story
The Sainsbury Wing will be sheathed in stone, and will have certain classical details that allude to the original National Gallery building, including clustered pilasters and ”blind,” or stone-covered, windows. But other aspects of the Venturi building will be more clearly modern, such as a wall of glass several stories high enclosing a grand staircase along the east side of the structure, opening up a clear view to the original National Gallery building and to Trafalgar Square.

The main internal features of the building will be the grand monumental staircase and a top floor of galleries that will house the gallery’s Early Renaissance paintings, including such masterworks as Piero della Francesca’s ”Baptism” and Jan van Eyck’s ”Arnolfini Marriage.” The galleries will vary in size and ceiling height, but they will all be fairly formal in organization and classical in mood, and will all be lit by daylight from skylights.

The new building will be a composite of old and new elements, then, and it appears from preliminary drawings and photographs of a model to have been put together with the sure compositional hand that is characteristic of Mr. Venturi’s work. It is an unorthodox building, full of quirky plays on classicism, such as one blind window that lacks a bottom sill, and a large engaged column beside the facade that appears to support nothing.

But it appears to be right for Trafalgar Square, a monumental square that is one of England’s greatest, but most difficult, urban spaces. The square presents a particularly tough architectural problem. It is dominated not by the National Gallery, which is its largest building and which fills its northern side, but by Nelson’s Column, the slender monument in its center, and by St. Martin’s-in-the-Fields, the church with a pointed spire by James Gibbs that is surely the square’s greatest building and the loose model for almost every small-town church in New England.

Too much is going on in Trafalgar Square for a modern building to be comfortably added to the mix, even if esthetic – and political – opinions were not moving away from modernism as they have in England since Prince Charles’s remark in 1984. But too quiet and proper a classical building would run the risk of appearing too timid and proper and of not being able to hold its own amid this active urban agglomeration. And it would surely collapse beside the weight of the old National Gallery building, the facade of which rambles on and on and could well overwhelm any building that did not have a striking presence of its own.

The architectural dilemma, then, was to create a building that would be many things at once. It would have to have sufficient presence to be an element of its own in Trafalgar Square, yet it would also have to contribute something toward pulling the mix of buildings on the square together. And it would have to relate comfortably to the original National Gallery building without either dominating it or being dominated by it.

The Venturi design appears to succeed at striking this difficult and tremendously subtle balance. It is different on all of its sides, to inflect toward the different buildings that surround it, yet it is also a coherent whole. The building is a case of classicism transformed, a design that is clearly of the late 20th century and not of any other period. But this is the late 20th century trying not so much to abandon classicism as seeking to make its own comment upon it.

In its somewhat gentle quirkiness, the design is in the tradition of English classicism, which has often favored the eccentric and complex over the simplistic and direct. So much English monumental architecture, from the work of such figures as Nicholas Hawksmoor in the 17th century to that of Edwin Lutyens in the 20th, has broken the standard rules of classicism and been the better for it. Clearly Mr. Venturi is aspiring to continue in this mold.