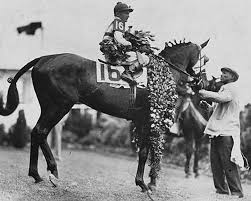 The 1875 Kentucky Derby was the first running of the Kentucky Derby. The race took place on May 17, 1875. The first Kentucky Derby was a 1.5-mile race, and the traditional distance of 1.25 miles was not established until the 1896 Derby. Thirteen of the fifteen jockeys in the race, including winner Oliver Lewis, were African-American. Attendance was estimated at 10,000.

The winner was Aristides, by two lengths. His jockey was Oliver Lewis, his trainer was Ansel Williamson, and his owner was H.P. McGrath. Aristides’ half-brother and stablemate Chesapeake also ran in the race. Both Aristides’ jockey and trainer were black. Aristides’s time of 2 minutes and 37.75 seconds was at the time a world record for the distance.