The first issue of Vogue is published. 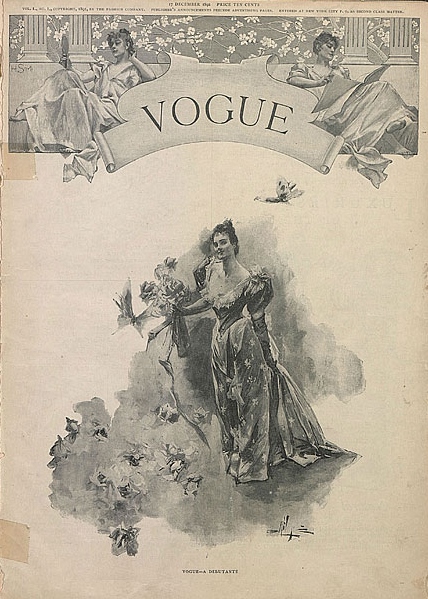 The first issue of Vogue magazine came out on December 17, 1892. It started as small, weekly society magazine, nothing like the Vogue we see today. It released its first issue “with the aim of attracting”, in the words of its founding publisher Arthur Baldwin Turnure, “the sage as well as the debutante, men of affairs as well as the belle.” (A. B. Wenzel/Vogue/Condé Nast). The first cover featured a debutante at her début – not much of a surprise there.

The small, weekly society magazine that went by the name of Vogue was staffed by “ladies and gentleman, so no one worked very hard and anybody who wanted extra duties was welcome to them. When Chase was just an 18-year-old “little girl from the country” (aka Asbury Park, New Jersey), a friend helped her get hired into Vogue’s circulation department, barely three years after the magazine was founded on this day in 1893. The teenager lived in a Manhattan boarding house with other single working women in an atmosphere she nostalgically describes as “family-like.” She threw herself into her job, a full-time gig addressing subscriber’s envelopes and adding new subscriber’s names into a ledger. Chase was paid $10 a week and loved every second of it.