Forced evacuation of settlers first begins, as part of Israeli disengagement from Gaza. 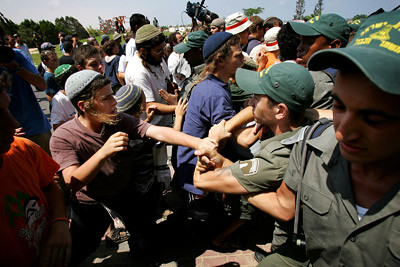 The disengagement was proposed in 2003 by Prime Minister Ariel Sharon, adopted by the Government in June 2004, approved by the Knesset in February 2005 and enacted in August 2005. Israeli citizens who refused to accept government compensation packages and voluntarily vacate their homes prior to the August 15, 2005 deadline, were evicted by Israeli security forces over a period of several days. The eviction of all residents, demolition of the residential buildings and evacuation of associated security personnel from the Gaza Strip was completed by September 12, 2005. The eviction and dismantlement of the four settlements in the northern West Bank was completed ten days later. A total of 8,000 Jewish settlers from all 21 settlements in the Gaza Strip were relocated. The average settler received compensation of over U.S $200,000.

Post-disengagement, Israel continued to exercise control over the external perimeter of Gaza, including seaports, air space, and the passage of people and goods.