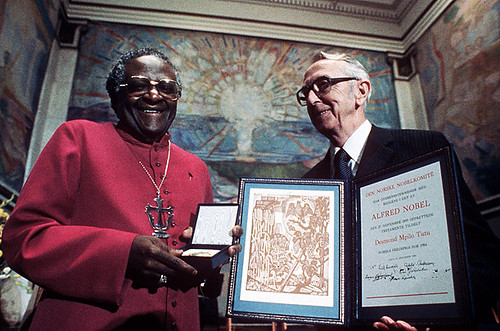 The Norwegian Nobel Committee has chosen to award the Nobel Peace Prize for 1984 to Bishop Desmond Tutu, General Secretary of the South African Council of Churches.

The Committee has attached importance to Desmond Tutu’s role as a unifying leader figure in the campaign to resolve the problem of apartheid in South Africa. The means by which this campaign is conducted is of vital importance for the whole of the continent of Africa and for the cause of peace in the world. Through the award of this year’s Peace Prize, the Committee wishes to direct attention to the non-violent struggle for liberation to which Desmond Tutu belongs, a struggle in which black and white South Africans unite to bring their country out of conflict and crisis.

The Nobel Peace Prize has been awarded to a South African once before, in 1960 when it was awarded to the former president of the African National Congress, Albert Lutuli. This year’s award should be seen as a renewed recognition of the courage and heroism shown by black South Africans in their use of peaceful methods in the struggle against apartheid. This recognition is also directed to all who, throughout the world, use such methods to stand in the vanguard of the campaign for racial equality as a human right.

It is the Committee’s wish that the Peace Prize now awarded to Desmond Tutu should be regarded not only as a gesture of support to him and to the South African Council of Churches of which he is leader, but also to all individuals and groups in South Africa who, with their concern for human dignity, fraternity and democracy, incite the admiration of the world.