The first part of Saint Petersburg Metro system is opened. 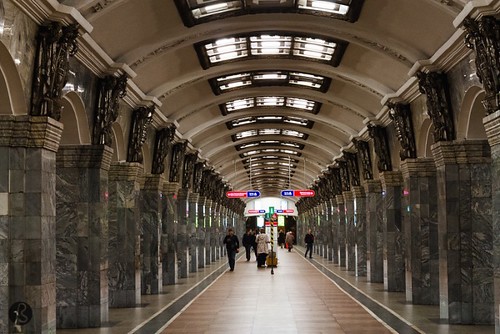 The Saint Petersburg Metro is the underground railway system in Saint Petersburg and Leningrad Oblast, Russia. It has been open since 15 November 1955. Formerly known as the V.I. Lenin Order of Lenin Leningrad Metropoliten, the system exhibits many typical Soviet designs and features exquisite decorations and artwork making it one of the most attractive and elegant metros in the world. Due to the city’s unique geology, the Saint Petersburg Metro is one of the deepest metro systems in the world and the deepest by the average depth of all the stations. The system’s deepest station, Admiralteyskaya, is 86 metres below ground. Serving about 2 million passengers daily, it is also the 19th busiest metro system in the world.

In 1994 it was planned, over 10 years, to massively extend the metro and almost “double” its size, building three new lines and 61 new stations. However, in reality, over this period until 2004, just 6 stations were opened. At this point the metro considered funding construction through a system of individual stage and station sponsorship. Saint Petersburg’s unforgiving geology has frequently hampered attempts by Metro builders. The most notable case took place on the Kirovsko-Vyborgskaya Line. While constructing the line in the 1970s, the tunnelers entered an underground cavity of the Neva River. They managed to complete the tunnel, but in 1995 the tunnel had to be closed and a section of it between Lesnaya and Ploschad Muzhestva flooded. For more than nine years, the northern segment of the line was physically cut off from the rest of the system. A new set of tunnels was built and in June 2004 normal service was restored.