A fire at the Cleveland Clinic in Cleveland, Ohio kills 123 people. 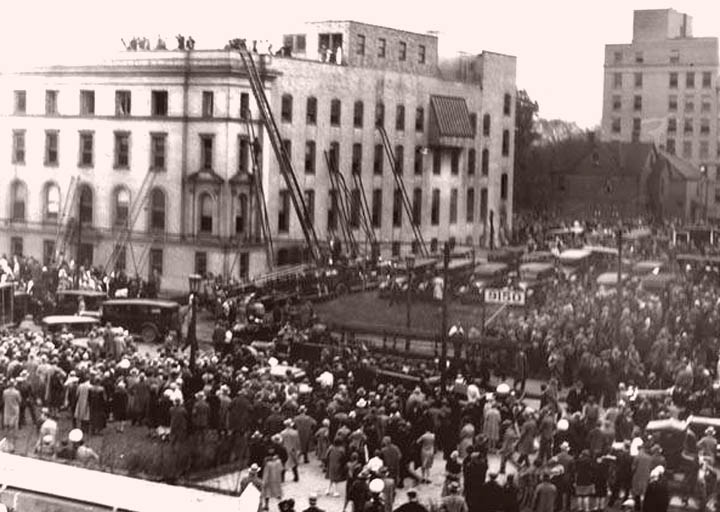 The Cleveland Clinic fire was a major structure fire at Cleveland Clinic in Cleveland, Ohio on May 15, 1929. It started in the basement of the hospital and it was caused by nitrocellulose x-ray film that ignited when an exposed light bulb was too close to the film. The fire generated poisonous gas and two separate explosions. The fire claimed 123 lives, including that of one of the clinic’s founders, Dr. John Phillips. Policeman Ernest Staab was killed by the gas while rescuing 21 victims.

The Cleveland Clinic is a non-profit Ohio corporation, founded in 1921 by four physicians. Late in the morning of May 15, 1929, an exposed light bulb too close to some nitrocellulose x-ray film ignited the film. The burning nitrocellulose film quickly produced a significant amount of poisonous gas, causing victims to suffocate, the faces of the victims turning yellowish brown within minutes. Further complicating fire-fighting, nitrocellulose continues to burn even while immersed in water, and fighting the film-fueled fire simply caused more poisonous smoke to accumulate, raising the death toll.

A first explosion came at a few seconds past 11:30 am; a clock on the third floor balcony stopped at that time. After the hollow center of the building was filled with poisonous gas, a second explosion shattered the skylight and sent the vapors into every corner of the clinic. Many of the building occupants succumbed to the poisons.

Despite the heavy loss of life, firemen estimated the property damage at only $50,000.

According to investigators, the clinic was not at fault for the fire. Nonetheless, the disaster was responsible for influencing significant changes to fire-fighting techniques. The city of Cleveland issued gas masks to its fire departments and proposed a city ambulance service. Nationally, the disaster prompted medical facilities to establish standards for the storage of nitrocellulose film and other hazardous materials.

Some historians have argued that the Cleveland Clinic fire was also a catalyst for the development of non-flammable, non-toxic chlorofluorocarbon refrigerants. Nevertheless, most of the deaths were from breathing highly toxic carbon monoxide and nitric oxide rather than methyl chloride itself, and even at the time of the disaster chemical companies were aware of the hazards of existing refrigerants.