James Naismith first publishes the rules for the sport of basketball. 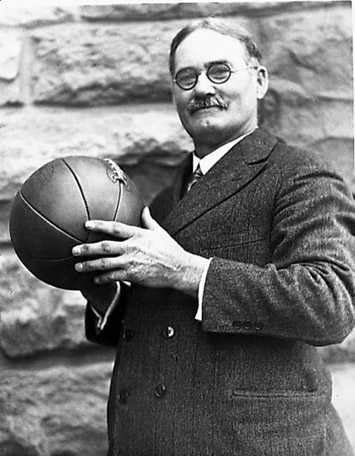 The person responsible for the popular game was Dr. James Naismith (1861-1939). Dr. Naismith was a Canadian-American Physical Education teacher at the School for Christian Workers located in Springfield, Massachusetts. In 1891, under direction from Dr. Luther Gulick, the head of the School, Naismith was given 14 days to create an indoor game. The goal of this directive was to provide a creative and healthy indoor “athletic distraction” for a rowdy class of students during the brutal New England winter.

It is believed that Naismith drew up the rules of his new game of Basketball in about an hour. Most of these rules still apply today. The game of Basketball became an instant success. The students found the game easy to play and the rules easy to understand. Moreover, the idea of getting a good exercise workout without having to go outside in the very cold winter was very attractive to the players and the coaches. The fans also liked the idea of not having to go outside in the cold to watch this new and fun game.

Basketball became popular very quickly and its popularity spread widely. The graduates of the YMCA school traveled across the country and introduced their new game to people in towns and cities across the land. Naismith and his players disseminated the rules of Basketball freely and the need for an indoor sport by many schools and organizations helped spread the popularity of the game.