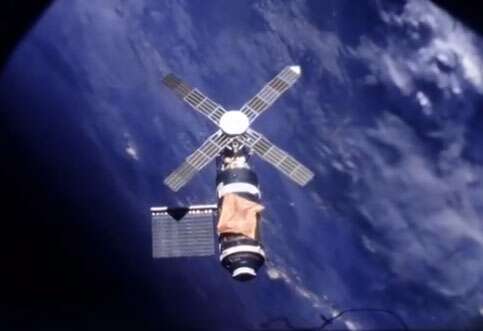 Skylab, the American space station and laboratory, was launched into space on May 14, 1973, starting a six-year journey that recorded various in-space firsts and discoveries.

Operated by NASA, Skylab orbited Earth for four years. It included an Apollo telescope mount, a multiple docking adapter with two docking ports, an airlock module with EVA hatches, and the orbital workshop, the main habitable volume of the station.

Although it was launched unmanned by a modified Saturn V rocket, three manned missions to the station were conducted between 1973 and 1974 using the Apollo Command/Service Module atop a smaller Saturn IB. Each mission carried three astronauts.

Power for the station came from solar arrays and fuel cells in the docked Apollo CSM. The rear of the station included a large waste tank, propellant tanks for maneuvering jets, and a heat radiator.

Skylab marked the first ever in-space major repair. After the station was damaged at launch when the micrometeoroid shield separated from the station and tore away, Skylab was deprived of most of its power and lost protection from intense solar heating. The first group of astronauts was able to deploy a replacement heat shade and free the single remaining, jammed main solar array.

Numerous scientific experiments were conducted aboard Skylab during its operational life. Indeed, from the station crews were able to confirm the existence of coronal holes in the sun. The Earth Resources Experiment Package was used to view the Earth with sensors that recorded data in the visible, infrared, and microwave spectral regions. And thousands of photographs of Earth were taken, while records for human time spent in orbit were extended.

The Skylab student project allowed high school students to submit ideas for experiments to be performed on the station. Students were able to participate in 19 experiments and two experiments were used on the Apollo-Soyuz Test Project in 1975.

Plans were made to refurbish and reuse Skylab using the Space Shuttle, however, when shuttle development was delayed, Skylab made a partially controlled re-entry into Earth’s atmosphere and disintegrated in 1979. Debris was scattered in the Indian Ocean and in a sparsely-populated area of Western Australia.

After Skylab’s disintegration, the focus shifted to the reusable Spacelab module, an orbital workshop that could be deployed from the Space Shuttle and returned to Earth. This eventually led to the US Orbital Segment of the International Space Station.