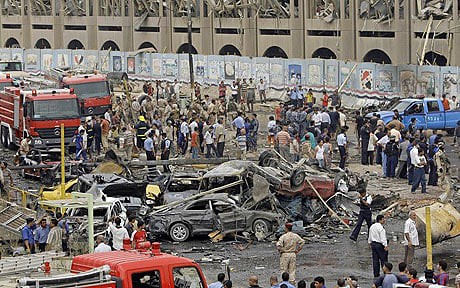 The 2007 Yazidi communities bombings occurred at around 7:20 pm local time on August 14, 2007, when four coordinated suicide bomb attacks detonated in the Yazidi towns of Kahtaniya and Jazeera near Mosul.

The Iraqi Red Crescent estimated that the bombs killed at least 500 and wounded 1,500 people, making this the Iraq War’s most deadly car bomb attack. It was also the second deadliest act of terrorism in history, following only behind the September 11 attacks in the United States.

For several months leading up the attack, tensions had been building up in the area, particularly between Yazidis and Sunni Muslims. Some Yazidis living in the area received threatening letters calling them “infidels”.Leaflets were also distributed denouncing Yazidis as “anti-Islamic” and warning them that an attack was imminent.

The attack might be connected to an incident wherein Du’a Khalil Aswad, a 17-year-old Yazidi girl, was stoned to death by the Yazidis. Aswad was believed to have wanted to convert in order to marry a Sunni. Two weeks later, after a video of the stoning appeared on the Internet, Sunni gunmen stopped minibuses filled with Yazidis; 23 Yazidi men were forced from a bus and shot dead.

The Sinjar area which has a mixed population of Yazidis, Kurds, Turkmen and Arabs was scheduled to vote in a plebiscite on accession to the Kurdish region in December 2007. This caused hostility among the neighbouring Arab communities. A force of 600 Kurdish Peshmerga was subsequently deployed in the area, and ditches were dug around Yazidi villages to prevent further attacks.