174 people are killed when an Aeroflot Ilyushin Il-62 crashes just outside Moscow. 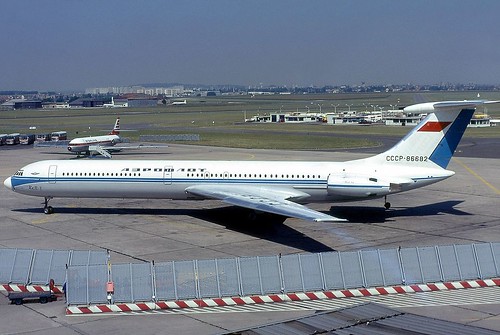 Aeroflot Flight 217 was a non-scheduled international passenger flight from Orly Airport in Paris to Sheremetyevo International Airport in Moscow, with a stopover at Shosseynaya Airport in Leningrad. On 13 October 1972, the Ilyushin Il-62 airliner operating the flight crashed on approach to Sheremetyevo, with the loss of all 164 passengers and crew of 10. At the time, it was the world’s worst aviation disaster As of 2016, the accident remains the second-deadliest one involving an Il-62, after LOT Flight 5055, and the second-deadliest on Russian soil, after Aeroflot Flight 3352.

Shortly before the expected landing, the plane was flying at the altitude of 1200 m and received the ATC instructions to descend to 400 m. The crew confirmed and started to descend, but later there was no action to return to the horizontal flight. The plane passed the 400 m mark with 20 m/s vertical velocity, no expected report to ATC and engines still running at low thrust. It crashed shortly afterwards, with landing gear up, spoilers retracted and horizontal speed about 620 km/h.

The cause of the crash could not be determined. Investigators did believe the most probable cause was the ‘psycho-physiological incapacitation of the crew for reasons unknown. Somewhere at the 500 – 600 m. elevation, 30 – 25 seconds before impact, the pilots either have been incapacitated or lost control of the plane.