The Carabinieri, the national gendarmerie of Italy, is set up. 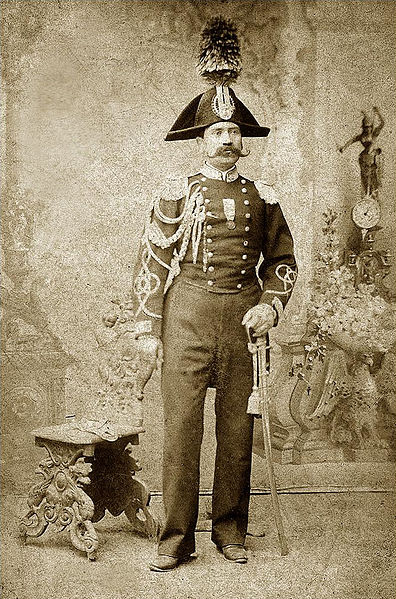 Inspired by the French Gendarmerie, the corps was created by King Victor Emmanuel I of Savoy with the aim of providing the Kingdom of Sardinia with a police corps. Previously, police duties were managed by the Dragoni di Sardegna Corps, created in 1726 and composed of volunteers, after French soldiers had occupied Turin at the end of the 18th century and later abandoned it to the Kingdom of Piedmont, the Royal Carabinieri Corps was instituted under the Royal Patents of 13 July 1814.

The new force was divided into divisions on the scale of one division for each province, the divisions were further divided into companies and subdivided into lieutenancies, which commanded and coordinated the local police stations and were distributed throughout the national territory in direct contact with the public.

Photo of a Carabiniere around 1875. The ‘Medal of Italian Independence’ is worn, indicating a veteran of the Risorgimento.
In 1868, the Corazzieri mounted division was formed – initially as an escort of honour for the sovereign, and since 1946 for the President of the Republic, the Italian unification saw the number of divisions increased, and on 24 January 1861 the Carabinieri were appointed the “First Force” of the new national military organization.

In May 1915 Italian troops marched to encompass South Tyrol, territory of their former allies the Austro-Hungarian empire, in the Fronte italiano campaign. The defenders had sufficient time to prepare strong fortifications there, and in the Carso theatre to the east, and the Italian regiments, under overall command of General Cadorna, found themselves repeatedly repulsed in harsh fighting. The role of the Carabinieri was to act as barrier troops, setting up machine gun posts to control the rear of the attacking regiments and prevent desertion.