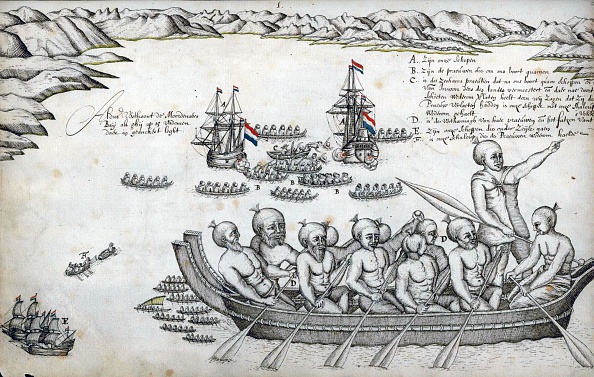 Abel Tasman was the first European to ‘discover’ New Zealand in 1642. His men were the first Europeans to have a confirmed encounter with M?ori. Born at Lutjegast, The Netherlands, Tasman went to sea in the service of the Dutch East India Company, receiving his first command in 1634. After patrolling the waters of the Dutch East Indies (now Indonesia) searching for smugglers and rebels, in 1642 he was appointed to head an expedition to the ‘still unexplored South- and East-land, which had been partly discovered by Dutch mariners. The company wanted to find out whether any exploitable southern lands existed or whether there was a sea passage across the Pacific to Chile. Tasman was given two small ships for the expedition.

The expedition departed from the company’s base at Batavia (Jakarta) in August 1642. After sailing west to Mauritius they turned south before being forced back by the cold to the 45th parallel. Continuing eastwards they sighted the mountains of a land that Tasman named Tasmania after the governor general of Batavia. The expedition was deemed a success although it was felt that Tasman could have made more effort to investigate more fully the lands he had discovered.

By 1653 Tasman retired. He remained in Batavia where he owned a substantial amount of land. He captained a small cargo ship, of which he was a part-owner. Tasman died in October 1659, survived by his second wife, Jannetje, and his daughter, Claesjen.