The Hitchhiker’s Guide to the Galaxy by Douglas Adams is published. 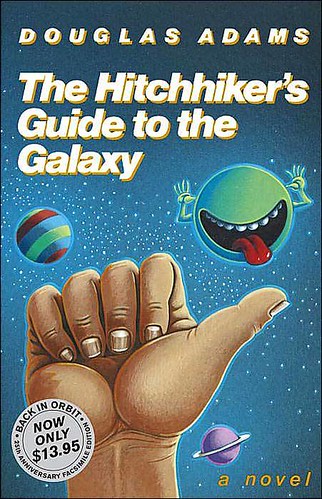 The namesake of the novel is The Hitchhiker’s Guide to the Galaxy, a fictional guide book for hitchhikers written in the form of an encyclopedia.The book begins with council workmen arriving at Arthur Dent’s house. They wish to demolish his house in order to build a bypass.

Arthur’s best friend, Ford Prefect, arrives, warning him of the end of the world. Ford is revealed to be an alien who had come to Earth to research it for the titular Hitchhiker’s Guide to the Galaxy, an enormous work providing information about every planet and place in the universe. The two head to a pub, where the locals question Ford’s knowledge of the Apocalypse.

An alien race, known as Vogons, show up to demolish Earth in order to build a bypass for an intergalactic highway. Arthur and Ford manage to get onto the Vogon ship just before Earth is demolished, where they are forced to listen to horrible Vogon poetry as a form of torture. Arthur and Ford are ordered to say how much they like the poetry in order to avoid being thrown out of the airlock, and while Ford finds listening to be painful, Arthur believes it to be genuinely good, since human poetry is apparently even worse.