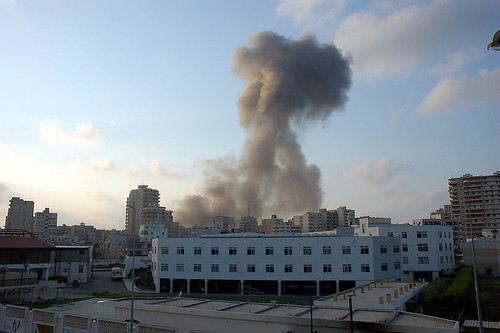 The 2006 Lebanon War, also called the 2006 Israel–Hezbollah War and known in Lebanon as the July War and in Israel as the Second Lebanon War was a 34-day military conflict in Lebanon, Northern Israel and the Golan Heights. The principal parties were Hezbollah paramilitary forces and the Israel Defense Forces. The conflict started on 12 July 2006, and continued until a United Nations-brokered ceasefire went into effect in the morning on 14 August 2006, though it formally ended on 8 September 2006 when Israel lifted its naval blockade of Lebanon. Due to unprecedented Iranian military support to Hezbollah before and during the war, some consider it the first round of the Iran–Israel proxy conflict, rather than a continuation of the Arab–Israeli conflict.

The conflict was precipitated by the 2006 Hezbollah cross-border raid. On 12 July 2006, Hezbollah fighters fired rockets at Israeli border towns as a diversion for an anti-tank missile attack on two armored Humvees patrolling the Israeli side of the border fence. The ambush left three soldiers dead. Two Israeli soldiers were abducted and taken by Hezbollah to Lebanon. Five more were killed in Lebanon, in a failed rescue attempt. Hezbollah demanded the release of Lebanese prisoners held by Israel in exchange for the release of the abducted soldiers. Israel refused and responded with airstrikes and artillery fire on targets in Lebanon. Israel attacked both Hezbollah military targets and Lebanese civilian infrastructure, including Beirut’s Rafic Hariri International Airport.The IDF launched a ground invasion of Southern Lebanon. Israel also imposed an air and naval blockade. Hezbollah then launched more rockets into northern Israel and engaged the IDF in guerrilla warfare from hardened positions.