Isaac Singer is granted a patent for his sewing machine.

Isaac Merritt Singer (October 27, 1811 – July 23, 1875) was an American inventor, actor, and businessman. He made important improvements in the design of the sewing machine and was the founder of what became one of the first American multi-national businesses, the Singer Sewing Machine Company.[2]

Many others, including Walter Hunt and Elias Howe, had patented sewing machines[3] before Singer, but his success was based on the practicality of his machine, the ease with which it could be adapted to home use, and its availability on an installment payment basis.[4]

Singer died in 1875, a millionaire dividing his $14 million fortune unequally among 20 of his children by his wives and various mistresses; one son, who supported his mother in her divorce case, received $500.[2]

His parents divorced in 1821, and Isaac had been abandoned by his mother from the age of ten;[2] he finally ran away from home at the age of twelve,[5][2] to join a traveling stage act the Rochester Players,[2] after finding bits of work as a joiner, lathe operator, and in a funfair.[2]

Financial success allowed Singer to buy a mansion on Fifth Avenue, into which he moved his second family.[citation needed] He and Mary Ann had abandoned their joint acting company, the Merritt Players, as his inventions were more successful.[2] He continued to live with Mary Ann, until she spotted him driving down Fifth Avenue seated beside Mary McGonigal, an employee, about whom Mary Ann already had suspicions.[citation needed] Singer also had an affair with her sister Kate McGonigal.[2]

And Mary Ann, still calling herself Mrs. I. M. Singer, had her husband arrested for bigamy. Singer was let out on bond and, disgraced, fled to London in 1862, taking Mary McGonigal with him.

In the aftermath, another of Isaac's families was discovered: he had a "wife", Mary Eastwood Walters, a machine demonstrator, and had had a daughter [2], Alice Eastwood Walters, in Lower Manhattan, who had adopted the surname Merritt. By 1860, Isaac had fathered and acknowledged eighteen children, sixteen of them still then living, by four women.[citation needed]

In 1861, his longstanding mistress Mary Ann Sponsor took him to court for abusing her and daughter Violette.[2] With Isaac in London, Mary Ann began setting about securing a financial claim to his assets by filing documents detailing his infidelities, and claiming that, though she had never been formally married to Isaac, they were wed under common law by living together for seven months after Isaac had been divorced from his first wife, Catherine. Eventually, a settlement was made, but no divorce was granted. However, she asserted that she was free to marry, and indeed she married John E. Foster.[citation needed]

In 1839, Singer obtained his first patent, for a machine to drill rock, selling it for $2,000 (or over $50,000 in 2018 dollars) to the I & M Canal Building Company. With this financial success, he opted to return to his career as an actor. He went on tour, forming a troupe known as the "Merritt Players", appearing onstage under the name "Isaac Merritt", with Mary Ann Sponsler (one of his mistresses, described below) also appearing onstage, calling herself "Mrs. Merritt".[citation needed] The tour lasted about five years.

He developed and patented a "machine for carving wood and metal" on April 10, 1849.

At 38, with Mary Ann and eight children, he packed up his family and moved back to New York City, hoping to market his wood-block cutting machine there. He obtained an advance to build a working prototype, and constructed one in the shop of A. B. Taylor & Co. Here he met , who became Singer's financier and partner. However, not long after the machine was built, the steam boiler blew up at the shop, destroying the prototype. Zieber persuaded Singer to make a new start in Boston, a center of the printing trade. Singer went to Boston in 1850 to display his invention at the machine shop of Orson C. Phelps. Orders for Singer's wood cutting machine were not, however, forthcoming.

In 1856, manufacturers Grover & Baker, Singer, Wheeler & Wilson, all accusing each other of patent infringement, met in Albany, New York to pursue their suits. Orlando B. Potter, a lawyer and president of the Grover and Baker Company, proposed that, rather than squander their profits on litigation, they pool their patents. This was the first patent pool, a process which enables the production of complicated machines without legal battles over patent rights.[6] They agreed to form the Sewing Machine Combination, but for this to be of any use, they had to secure the cooperation of Elias Howe, who still held certain vital uncontested patents. Terms were arranged; Howe received a royalty on every sewing machine manufactured.[citation needed]

Up to then, sewing machines had been industrial machines, made for garments, shoes, bridles and for tailors, but in 1856, smaller machines began to be marketed for home use. However, at the then enormous price of over $100 ($2,846 in 2019 dollars), few sold.[8] Singer invested heavily in mass production utilizing the concept of interchangeable parts developed by Samuel Colt and Eli Whitney for their firearms. He was able to cut the price in half, while at the same time increasing his profit margin by 530%.[8] Singer was the first who put a family machine, "the turtle back", on the market. Eventually, the price came down to $10 ($285 in 2019 dollars). According to PBS, "His partner, Edward Cabot Clark, pioneered installment purchasing plans and accepted trade-ins, causing sales to soar."[5]

Women were able to make items at home for their families or for sale and charitable groups began to support poorer women to find useful skills and respectable employment in sewing, such as (1875), , and associated magazines, pattern books and group classes began for the better off women who also wanted to have some form of useful, economic activity, which a sewing machine at home now offered.[2]

I. M. Singer expanded into the European market, establishing a factory in Clydebank, near Glasgow, controlled by the parent company, becoming one of the first American-based multinational corporations, with agencies in Paris and Rio de Janeiro.[citation needed]

Later as The Singer Manufacturing Company and its competitors expanded, due to its affordability (or purchase plan terms) by the 1940s there were 24,000 sewing classes a year running in the UK alone, and the 1944 Education Act made practical dressmaking a compulsory subject for girls in all state schools.[2] By the 1950s, there were and advertising campaigns to encourage girls to make their own fashions to attract boys' interest.[2] 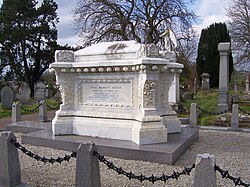 In 1863, I. M. Singer & Co. was dissolved by mutual consent with Edward Cabot Clark seeing Singer's reputation as a risk to growth; but the business continued with Singer owning 40% of shares and still on the Board, [2] as "The Singer Manufacturing Company," in 1887.

In 1871, Singer purchased an estate and settled with Isabella in Paignton, Devon, England.[2] He commissioned a 110 roomed Oldway Mansion as his private residence, with a hall of mirrors, maze and grotto garden[2]; it was rebuilt by Paris Singer, his third son from Isabella, in the style of the Palace of Versailles. And the area became known locally as 'Singerton'. [2] It has been named by the Victorian Society as a heritage building at risk of disrepair.[10]

Isaac Singer died in 1875, shortly after the wedding of his daughter by Mary Eastwood Walters, Alice, whose dress had cost as much as a London apartment.[2] His funeral was an elaborate affair with eighty horse-drawn carriages, and around 2000 mourners, to see him buried locally, at his request in three layers of coffin (cedar lined with satin, lead, English oak with silver decoration) and a marble tomb.[2]

Singer's prototype sewing machine became the first to work in a practical way. It could sew 900 stitches per minute, far better than the 40 of an accomplished seamstress on simple work.[5] This started the industrialisation of garment and textile manufacturing, as a shirt took an hour to make compared to fifteen hours previously, but these still needed finishing by hand, and the finishers worked alone on piecework terms at home, but mass over-production by factories' machines, led to pressure on wages and to unemployment, a risk described in Karl Marx, Das Capital. In Scotland in 1861 there were 62,000 female dressmakers, thirty years later the USA had 300,000 mainly single women. [2]

In 1911, the Triangle Shirtwaist Factory fire in New York City killed 140 people, 62 jumping to their deaths from upper floors, as doors were locked to keep out inspectors and union leaders. This led to safer working practices although sweatshops continued. Women workers sewing car seat covers in Ford Motor Company Limited's Dagenham plant in the UK were getting 15% less pay than men doing the same job in 1968. A three-week strike helped win their case, and the Equal Pay Act was passed in 1970. But in 2013, the East Midlands area in the UK still had 11,000 textile workers paid below the national minimum wage.[2]

Textile and garment sewing is now a global industry, and sweatshop factories often employ the poorest women, children and migrants, with few labour rights. A number of non-governmental organisations are attempting to end worker exploitation in clothing industry globally, such as Clean Clothes Campaign, Global Exchange, No Sweat, , Fairtrade. Fair Wear Foundation especially raised public awareness of the exploration of sewing workers—both after the 2012 garment factory disaster in Dhaka, Bangladesh, resulted in 117 dead and 200 injured from at least 1,600 people working in a nine-storey factory on sewing machines (unable to escape the fire in similar sweatshop circumstances to those in New York a century earlier)[2] and again after 24 April 2013, as more were killed at Dhaka's Rana Plaza, another multi-storey factory which housed multiple clothing manufacturing companies along with a bank and apartments, collapsed killing over 1,100 workers and injuring 2,000 more. In November 2013, the Accord on Fire and Building Safety in Bangladesh, the Alliance for Bangladesh Worker Safety and the National Tripartite Action Plan, agreed to work for new workplace safety standards for clothing manufacturing factories.[11].

Daughter Winnaretta Singer (1865-1943), otherwise known as the Princess de Polignac, was married twice, and was a vital patron of 20th-century music. She held open salons at her house in Paris that were frequented by famous people including Marcel Proust, and where the wealthy encountered new musicians, including Debussy. She left a legacy in the Singer-Polignac foundation that helped young musicians.[citation needed]

Son (b. Paris, 20 February 1867; d. London, 24 June 1932), was married to Cecilia Henrietta Augusta ("Lillie") Graham (b. Perth Australia, 6 June 1867; d. Paignton, 7 March 1951). Singer Island, Florida, was named for him. He was a close friend of the Palm Beach architect Addison Mizner. Paris had a son with Isadora Duncan, Patrick Singer, who died in 1913 in a drowning accident while a small child.[citation needed]