A total of 315 people are killed in two garment factory fires in Pakistan.

Garment factories in the Pakistani cities of Karachi and Lahore caught fire on 11 September 2012. The fires occurred in a textile factory in the western part of Karachi and in a shoe making factory in Lahore. The fires are considered to be the most deadly and worst industrial factory fires in Pakistan's history,[3] killing 289 people and seriously injuring more than 600.[4][5][6]

Pakistan has one of the largest labour and manpower resources in the world, due to its large population. According to data produced by the CIA World Factbook, the total number of Pakistan's labour force is 58.4 million, making it the 10th largest country in terms of available human workforce.[7] About 20.1% of labour force is involved in industry. The conditions under which Pakistan's blue-collar labour works have often been raised by trade unions and workers' rights organisations. There is also a controversial, yet wide use of child labour in Pakistan.[8]

The garment factory "Ali Enterprises", which is located in Plot 67, Hub Road, Baldia Town, Karachi,[9] used to export its garments to Europe and the United States, and had employed between 1,200 and 1,500 workers. Ali Enterprises manufactured denim, knitted garments, and hosiery, and had capital of between $10 million and $50 million. Workers at Ali Enterprises said they earned between 5,000 and 10,000 rupees ($52 to $104) a month for their labour.[10] The factory manufactured jeans for textile discounter KiK. KiK claimed to control enforcement of labour laws and security standards of its suppliers. However, a security check in 2007 revealed deficiencies in fire protection of the Karachi plant, which KiK claimed were fixed by 2011. According to the Pakistani Textile Workers Union (NTUF), a high working pressure and overtime with unpaid additional work were frequent at the factory.[11] A few weeks prior to the fire, the factory passed an internationally recognised safety test.[12][13] The factory is also suspected of using child labour and locked workplaces analogous to prison cells. The owner of the factory, Abdul Aziz, had reportedly prevented inspections of the factory.[14] 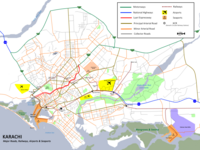 A private garment factory lit on fire and the flames ignited chemicals that were stored in the factory.[15] The Baldia Town factory inferno case took a dramatic turn on Friday 7 Feb 2015 when a report by Rangers claimed that the MQM was behind the deadly fire that claimed the lives of at least 258 factory workers.[16] MQM set fire factory to take Extortion money from owners.[17][18][19][20]

The report prepared by a joint investigation team (JIT) was submitted to the Sindh High Court by an additional attorney general, along with a statement of the deputy assistant judge advocate general of Rangers, Major Ashfaque Ahmed.[16]

The statement said the information had been disclosed by suspect Mohammad Rizwan Qureshi, an alleged worker of the MQM, on June 22, 2013 during joint investigation of the factory inferno. According to the JIT report, the MQM worker revealed that a “well-known party high official” had demanded Rs200 million as Bhatta (extortion money) though his frontman from Ali Enterprises, the owners of the ill-fated factory, in Aug 2012.[15]

Between 300 and 400 workers were inside the factory when the blaze erupted. Officials said that all the exit doors in the factory were locked and many of the windows of the factory were covered with iron bars, which made it difficult for workers to escape at the time of the fire and consequently many of the deaths were caused by suffocation.[21] Baldia Town Factory owner names MQM lawmakers, Ex governor sindh Ishrat ul Ibad and ex chief of CPLC Ahmed Chinoy.[22][23]

Location of factory in Lahore.

Just weeks before the fire the plant had been given a SA8000 certification.[24]

The shoemaking factory is located on Band Road in Gulshan-i-Ravi in Lahore. It caught fire when sparks from a faulty electricity generator flew into chemicals. The generator was installed in the garage of the factory compound, which was also the only entry and exit point of the factory.[26]

The Baldia Town factory inferno case took a dramatic turn when a report by Rangers claimed that the Muttahida Qaumi Movement was behind the deadly fire that claimed the lives of at least 258 factory workers.

The report prepared by a joint investigation team (JIT) was submitted to the Sindh High Court by an additional attorney general, along with a statement of the deputy assistant judge advocate general of Rangers, Major Ashfaque Ahmed.

The statement said the information had been disclosed by suspect Mohammad Rizwan Qureshi, an alleged worker of the MQM, on June 22, 2013 during joint investigation of the factory inferno.

According to the JIT report, the MQM worker revealed that a “well-known party high official” had demanded Rs200 million as Bhatta (extortion money) though his frontman from Ali Enterprises, the owners of the ill-fated factory, in Aug 2012.[27]

One of the factory owners in Karachi, Arshad Bhaila, claimed that the fire first broke out in the warehouse and that he called the fire brigade, which arrived about 90 minutes late. The New York Times reported that the local fire department arrived 75 minutes after the fire started.[28]

A judicial inquiry headed by Justice Zahid Qurban Alvi reported that a short circuit caused the fire. The report cited several factors that exacerbated the situation leading to the loss of life, including the late arrival of fire tenders, the lack of fire hydrants, and traffic congestion. The tribunal was highly critical of the factory owners and government, which failed to enforce the law. It also criticized the police's forensic department for failing to conduct a scientific investigation.[29]

On 14 September, Justice Hassan Azhar of Sindh High Court Larkana Bench approved Rs. 500,000 bail for factory owners Abdul Aziz, Shahid Bhaila and Arshad Bhaila.[30] All the bank accounts of the owners and the company are frozen and the owners are not allowed to leave the country as they are on exit control list. The owners are facing charges of pre-meditated murder.[31][32] The Deputy General Secretary of the Pakistan National Federation of Trade Unions (PNFTU) Nasir Manoor said that the owner of the factory, Abdul Aziz, must have fled from the country despite having his name on the Exit Control List (ECL) and he would return only after the issue was off the media radar.[14] The Sindh Building Control Authority (SBCA) denied allegations that it was involved in the approval of the building plans for the Baldia Town garment factory.[33] The C.E.O. of Ali Enterprises, Shahid Bhalia, son of the factory's owner, said that he was innocent and was ready to appear before any court and provide compensation to the victims and their families.[34]

President Asif Ali Zardari expressed grave concern over the rising toll in the fire incident. He also consoled the bereaved families and directed the authorities concerned to ensure that the best medical assistance was provided to the affected people.had called for a report on fire incidents in Karachi and Lahore from the governors of the two provinces.[35]

Prime Minister Raja Pervaiz Ashraf, who was on an official trip to China, telephoned Punjab Governor Sardar Latif Khosa and Chief Minister Mian Shahbaz Sharif to express his grief and shock over the incident in Lahore. He also called Sindh Governor Dr Ishratul Ebad to learn about the latest situation regarding the Karachi factory fire. Ashraf also gave his heartfelt condolences and sympathies to the victims' families. He asked the governors and chief ministers to extend all out assistance and cooperation to the affected people.[35]

Sindh Minister for Industry and Commerce Rauf Siddique announced his resignation as a result of the incidence.[36] The Muttahida Qaumi Movement announced three days of mourning. The Chief Justice of Pakistan Iftikhar Muhammad Chaudhry and judges of the Supreme Court of Pakistan also offered condolences and prayed for the victims.[37]

Governor of Sindh Ishrat-ul-Ibad Khan has expressed grief over the loss of life in the fire incident and expressed sympathy with the injured of the incident. He then directed the officials concerned to utilise all available resources to control the blaze and ordered an inquiry into the incident. He has also directed the respective authorities to ensure the victims do not face any problems in their treatment and recovery. He also prayed for the early recovery of the injured.[38]

Pakistan's parliament then unanimously passed a resolution asking provincial and federal authorities to fully investigate the accidents.[39] According to the Geo TV, under Factory Act 1934, the owner will have to pay only Rs. 5000 in penalty over negligence in the protection of workers.[40] The leader of Pakistan Muslim League (N) (PML-N), Nawaz Sharif has announced Rs. 300,000 in aid to the families of those killed in this incident.[41] On 13 September it was reported that the Sind provincial government would offer financial compensation of Rs. 500,000s to the families of the dead victims and Rs. 50,000 to those who had been injured,[42] while the city's power utility company, KESC, announced they would waive all outstanding balances of the victims as a goodwill gesture.[5] Sindh Chief Minister Syed Qaim Ali Shah also announced further compensation of Rs. 300,000 for the families of the dead and Rs. 50,000 for those who had been injured.[43][44]

In Lahore, the Punjab Government announced the same value for the families of those who died and Rs. 75,000 for each of those who had been injured as compensation.[9][45]

Real estate tycoon Malik Riaz Hussain also announced cash assistance of Rs. 200,000 for the family members of those killed in both the factory fires and Rs. 100,000 for those who had been injured.[46] Zohra Yusuf, Chair of The Human Rights Commission of Pakistan has urged government officials to initiate a full probe of the disaster and conditions surrounding the facilities, echoing claims made from the head of fire fighting that factory was dangerous.[5]