A major fire in Channel Tunnel broke out on a freight train. Part of the tunnel is closed for 6 months. 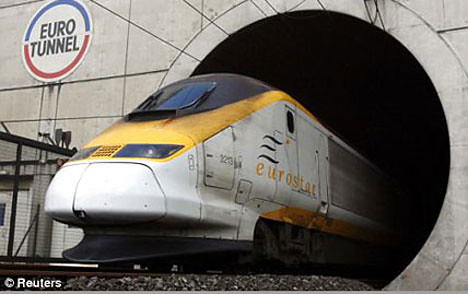 Firefighters endured extreme temperatures and cramped quarters as they extinguished an intense blaze in the undersea train tunnel that has revolutionized travel between France and England.

The fire deep under the English Channel left the British Isles cut off for more than a day from continental Europe other than by sea or air – the only routes that existed before the undersea tunnel opened to passengers in 1994.

Laboring through the night, firefighters painstakingly worked toward each other from separate ends in France and Britain to combat the blaze, which broke out Thursday afternoon aboard one of the trains that whiz back and forth through the 30-mile tunnel, transporting trucks and holidaymakers’ cars.

Firefighters spent no more than 15 minutes at a time inside the tunnel, because of the intense temperatures of up to around 1,830 degrees. The blaze was declared extinguished around midday.

Five of 14 people injured remained in hospitals Friday, said prosecutor Gerald Lesigne, who was investigating the blaze. Officials said some people had inhaled large quantities of smoke; others hurt their hands by breaking the train’s windows to escape.

Officials appeared to rule out terrorism as a cause of the blaze, one of the most serious incidents in the history of the tunnel that has made day trips between Paris and London possible by high-speed train.

The fire was in the tunnel that runs from England to France. Its burned sections could be closed for weeks.The tunnel has had a few fires in the past, including one in 1996 that shut freight traffic for months.

People suffered smoke inhalation injuries because they evacuated the train themselves before tunnel operators had ventilated away the smoke, as safety procedures call for.