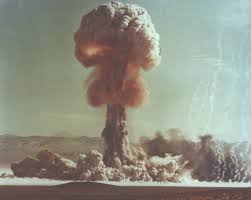 At 6pm on May 11, 1998 the Indian Prime Minister Atal Behari Vajpayee announced the successful completion of India’s first nuclear tests since the ‘peaceful nuclear test’ of 1974. He read the following statement.

“Today at 1545 hrs, India conducted three underground nuclear tests in the Pokhran range. The tests were conducted with a fission device, a low yield device and a thermonuclear device. The measured yields are in line with expected values. Measurements have also confirmed that there was no release of radioactivity into the atmosphere. These were contained explosions like the experiment conducted in may 1974. I warmly congratulate the scientists and engineers who have carried out these successful tests.”
The photograph is Mr Vajpayee announcing the tests.

According to the Times of India earlier in the day the 500 residents of Pokhran, 35km from the 1974 blast were evacuated. The tests were conducted within hours about 3km north of Khetolai, the people of Pokhran felt the earth shake 3 times within 5 seconds. The residents who also observed the 1974 test immediately knew a nuclear test had just been completed. This also came as no surprise as the increase in military activity at the site had significantly increased over the last year.

When the official announcement came that India has successfully undertaken the nuclear tests, the people of Pokhran started dancing with joy in the main bazaar. Celebrations erupted throughout India, evidence of broad popularity of the tests. All political parties announced their support for the tests.

The tests resulted in immediate condemnation from around the world. The U.S., Japan and Canada imposed sanctions, other countries withdrew ambassadors and made strong complaints.