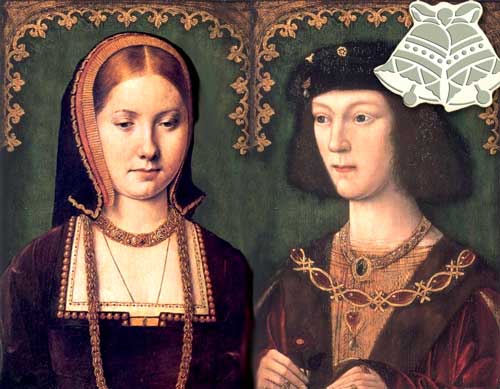 On this day in history, 11th June 1509, the new king, Henry VIII, married his brother’s widow, Catherine of Aragon, nearly 6 years after they had originally been betrothed. The marriage took place in a private ceremony in the queen’s closet at Greenwich Palace in front of two witnesses: Lord Steward Shrewsbury and groom of the privy chamber, William Thomas. As soon as the wedding was over, preparations began in earnest for the double coronation of King Henry VIII and Queen Catherine.
Catherine of Aragon

Catherine of Aragon was born on the 16th December 1485 and was the youngest surviving child of the Spanish Catholic monarchs, Ferdinand II of Aragon and Isabella I of Castile. It is interesting to note that she had a strong claim to the English throne as she was descended from John of Gaunt, 1st Duke of Lancaster and son of Edward III. She did not have the typical dark Spanish looks, instead she had blue eyes and auburn or strawberry blonde hair, and was said to be a great beauty. When she arrived in England in 1501 to marry Prince Arthur, heir to the throne, Thomas More said of her:-