The Kyoto Protocol is ready for signature. 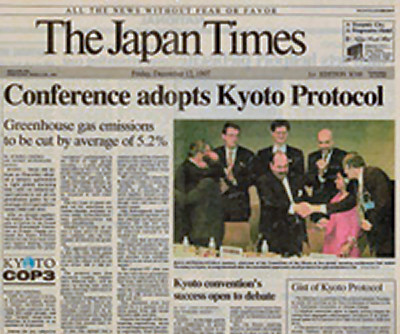 The Kyoto Protocol is an international treaty which extends the 1992 United Nations Framework Convention on Climate Change that commits State Parties to reduce greenhouse gas emissions, based on the scientific consensus that global warming is occurring and it is extremely likely that human-made CO2 emissions have predominantly caused it. The Kyoto Protocol was adopted in Kyoto, Japan, on December 11, 1997 and entered into force on February 16, 2005. There are currently 192 parties to the Protocol.

The Kyoto Protocol implemented the objective of the UNFCCC to fight global warming by reducing greenhouse gas concentrations in the atmosphere to “a level that would prevent dangerous anthropogenic interference with the climate system”. The Protocol is based on the principle of common but differentiated responsibilities: it puts the obligation to reduce current emissions on developed countries on the basis that they are historically responsible for the current levels of greenhouse gases in the atmosphere.

The Protocol’s first commitment period started in 2008 and ended in 2012. A second commitment period was agreed on in 2012, known as the Doha Amendment to the protocol, in which 37 countries have binding targets: Australia, the European Union, Belarus, Iceland, Kazakhstan, Liechtenstein, Norway, Switzerland, and Ukraine. Belarus, Kazakhstan and Ukraine have stated that they may withdraw from the Protocol or not put into legal force the Amendment with second round targets. Japan, New Zealand and Russia have participated in Kyoto’s first-round but have not taken on new targets in the second commitment period. Other developed countries without second-round targets are Canada and the United States. As of July 2016, 66 states have accepted the Doha Amendment, while entry into force requires the acceptances of 144 states. Of the 37 countries with binding commitments, 7 have ratified.

Negotiations were held in the framework of the yearly UNFCCC Climate Change Conferences on measures to be taken after the second commitment period ends in 2020. This resulted in the 2015 adoption of the Paris Agreement, which is a separate instrument under the UNFCCC rather than an amendment of the Kyoto protocol.