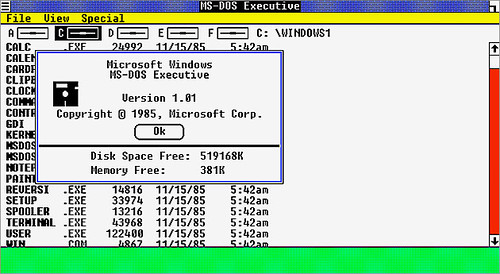 Gates, Microsoft’s president and board chairman, held an elaborate event at New York City’s posh Helmsley Palace Hotel. The debutante at this ball was an operating system with a graphical user interface.

A History of Microsoft Windows Photo Gallery
BSOD Through the AgesIf you were struggling with the arcane and unfriendly MS-DOS, you were ready to get something that was easier to drive. Typing commands at the C prompt may have been a piece of C:\ake for programmers and geeks, but it was a pain in the wrist for the run-of-the-mill office chair jockey.

Microsoft started working on a product first called Interface Manager in September 1981. Early prototypes used MS Word-style menus at the bottom of the screen. That changed to pulldown menus and dialogs (a la Xerox Star) in 1982.

By 1983, Microsoft was facing competition from the just-released VisiOn and the forthcoming TopView. Apple had already released Lisa, but Digital’s GEM, Quarterdeck’s DESQ, the Amiga Workbench, IBM OS/2 and Tandy DeskMate were all still in the future.