Astronomers discover the rings of Uranus. 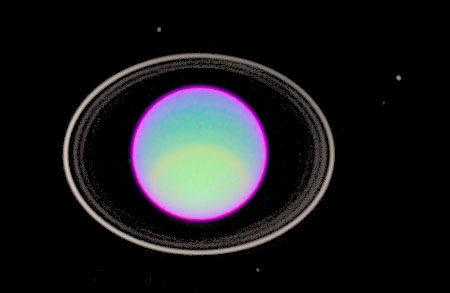 Astronomers now know that Uranus has 13 distinct rings. They start at about a distance of 38,000 km from the center of Uranus, and then extend out to about 98,000 km.Unlike the rings of Saturn, which are very bright and composed of water ice, the rings of Uranus are relatively dark. Instead of containing dust, the rings seem to be made up of larger chunks, measuring 0.2 to 20 m across. These would really qualify as boulders, not dust. They’re also very thin. Each ring is only a few km thick.

Uranus now has a total of 10 known rings.The rings of Uranus are thought to be very young, not more than 600 million years old. They probably came from a few shepherd moons that were shattered by Uranus’ gravity and turned into rings around the planet. The chunks collided with each other and turned into smaller and smaller particles.