Charles II is crowned as King of Scotland. 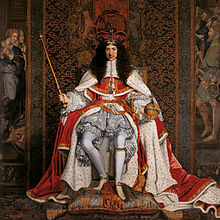 Charles II lived from 29 May 1630 to 6 February 1685. Legally, he became King of England, Scotland, and Ireland on 30 January 1649, the day his father, Charles I, was beheaded. In practice, he did not become undisputed King of England until 29 May 1660: while in Scotland he had been proclaimed King Charles II by the Scottish Parliament on 5 February 1649; and crowned on 1 January 1651. The wider picture in Scotland at the time is set out in our Historical Timeline.

Charles Stuart was born in St. James’s Palace, London on 29 May 1630, and as the eldest surviving son of Charles I was made Prince of Wales and heir to the crowns held by his father. During the First Civil War the 12 year-old Charles Stuart accompanied his father at the Battle of Edgehill, and at the age of 15, took part in a number of the campaigns of 1645. Charles I was taken prisoner in 1646, and the following year Charles Stuart went to France for safety.

During the Second Civil War Charles Stuart was unable to reach the Scottish forces invading Northern England before their defeat by Oliver Cromwell at the Battle of Preston on 17–19 August 1648. Charles I was beheaded on 30 January 1649. On 5 February 1649 the Scottish Parliament proclaimed the 19 year-old Charles Stuart as Charles II: while the following month the English Parliament declared England to be a republic.

From March 1649, Charles was based in the Hague, where he began a series of negotiations with representatives of the Scottish Parliament about his return. In exchange for their support, the Scots wanted Charles to sign the Covenant, and to impose Presbyterianism in England, Wales and Ireland. Charles refused, instead attempting to regain control in Scotland by force. At his request, the Marquis of Montrose, who had brilliantly led the Royalist forces against the Covenanters in Scotland during the Civil War, landed in Orkney with 500 Scandinavian mercenaries, before moving on to Caithness, reinforced by Orcadian volunteers. However, on 27 April 1650 Montrose’s forces lost to a much smaller Covenanter army at the Battle of Carbisdale, near Bonar Bridge. Montrose was subsequently executed in Edinburgh, in part because Charles denied to the Scots that he was behind Montrose’s actions.